Appearing before military jurors at a sentencing hearing Thursday, Guantanamo Bay prisoner Majid Khan described the brutal and sadistic torture to which he was subjected during three years of detention at secret CIA “black sites.” 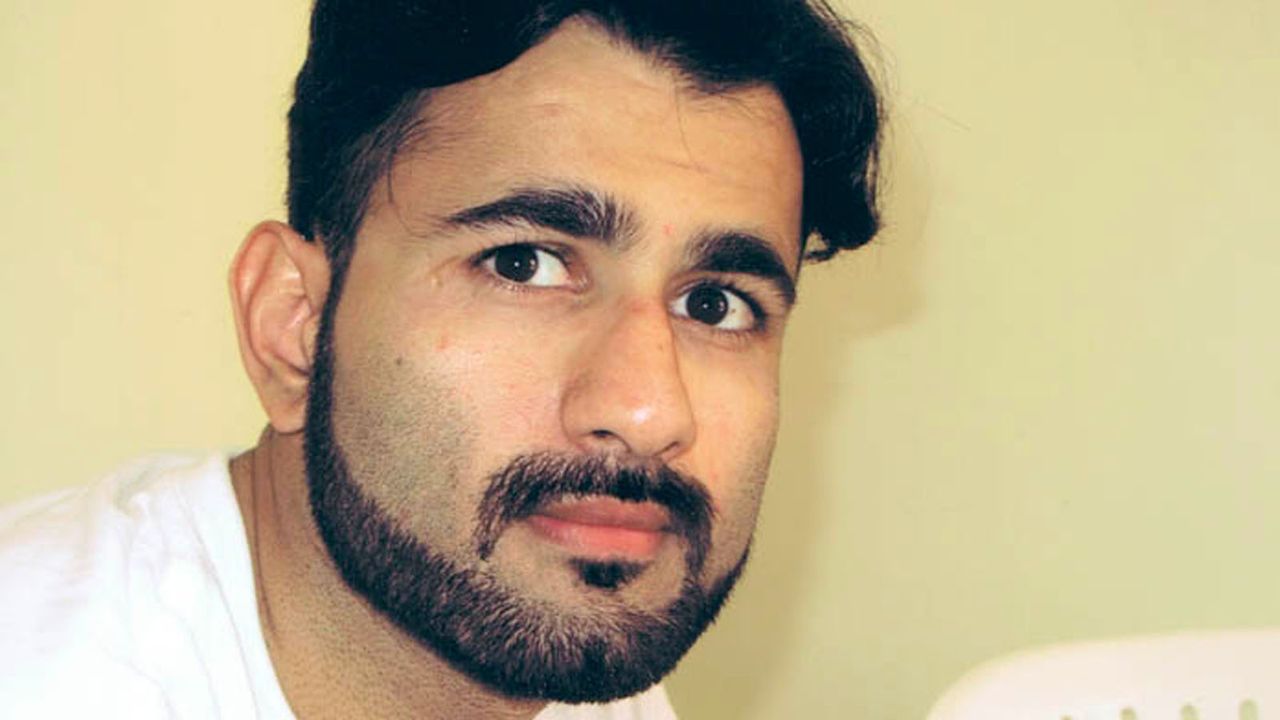 Khan, 41, a legal US resident who graduated from high school in Baltimore, where he moved with his family from Pakistan in the late 1990s, is the first-ever ex-prisoner of the CIA sites set up under the George W. Bush administration to openly describe the horrific abuse he endured.

Khan spent two hours before a jury of US military officers reading out a 36-page document that cataloged atrocities approved and applied in the name of “enhanced interrogation techniques.” These included being kept for hours in nudity with only a hood on his head, being chained to a wall, being suspended from a ceiling beam for hours on end, having his arms chained to make sleep impossible, being nearly drowned in tubs of ice cold water and having a CIA interrogator pour water into his nose and mouth.

He further described how CIA agents pumped water into his rectum with a “green garden hose.” He recounted, “They connected one end to the faucet, put the other in my rectum and they turned on the water.”

According to an account published by the New York Times, “He received beatings while nude and spent long stretches in chains—at times shackled to a wall and crouching ‘like a dog,’ he said, or with his arms extended high above his head and chained to a beam inside his cell. He was kept in darkness and dragged, hooded and shackled, his head slamming into floors, walls and stairs as he was moved between cells.

“Earlier accounts released by his lawyers said he was so sleep deprived for a time that he began to hallucinate. He described the experience: images of a cow and a giant lizard advancing on him inside a cell while he was chained to a beam above his head. He tried to kick them away but lost his balance, causing his chains to jerk him.”

“I thought I was going to die,” Khan told the military tribunal. “I would beg them to stop and swear to them that I didn’t know anything.” He added, “The more I cooperated, the more I was tortured.”

In December of 2014, the Senate Intelligence Committee released a 550-page declassified and redacted summary of its more than 6,000-page investigation into the Bush-era CIA torture program. The report cited Khan’s treatment as an example of the illegal and depraved methods used by the CIA—with the approval of the Bush White House and the tacit endorsement of congressional Democrats who were briefed on the program—at its secret prisons. It noted that his captors responded to his going on a hunger strike by “infusing” a puree of his lunch—hummus, pasta with sauce, nuts and raisins—through his anus. The CIA called the practice “rectal feeding.” Khan’s lawyers called it rape.

The CIA declined Thursday to comment on Khan’s testimony, merely noting that “the CIA’s detention and interrogation program ended in 2009.”

A Pakistani national, Khan was born in Saudi Arabia and raised in Pakistan. He gained asylum in the US in 1998 and worked at his father’s gas station. He was working for a telecommunications contractor that managed the Pentagon phone system at the time of the September 11 attacks. Deeply affected by 9/11 and the US government crackdown on Muslims that followed, he returned to Pakistan in 2002 to marry in an arranged marriage and returned again in March of 2003.

He, his brother and other relatives were arrested at their residence in Karachi by Pakistani agents and taken to a CIA black site in Pakistan. All but Majid were released after a month. His wife and the rest of the family heard nothing of his whereabouts for three years.

He was transferred to a CIA black site in Afghanistan known as the “Salt Pit.” The Bush administration and the CIA claimed that he had links to Khalid Sheikh Mohammed, the alleged mastermind of the 9/11 attacks, and designated him as a “high value detainee.”

In a 2007 affidavit, Ali Khan, Majid’s father, wrote that his son was subjected to 20 days of beatings, stress positions, hooding and sleep deprivation, after which he was forced to sign a confession that he had not even been allowed to read. The affidavit also said that guards at the CIA black site where Majid was first held told Ali Khan that at the same facility, the children of Khalid Sheikh Mohammed, who were six and eight years old, were being held, deprived of food and water and abusively interrogated to force them to reveal their father’s whereabouts.

Bush announced in September 2006 that Khan and 13 other “high value detainees” had been transferred from secret CIA prisons to military custody at Guantanamo Bay to await prosecution under the new military tribunal system authorized by the Military Commissions Act of 2006. Khan challenged his detention in court, with the Center for Constitutional Rights filing a habeas corpus challenge in October 2006.

The following month, the Justice Department said that Khan should not be allowed to speak to an attorney because he might “reveal the agency’s [CIA’s] closely guarded interrogation techniques.” Three months later, in February of 2007, a federal appeals court ruled that Guantanamo detainees could not use the US court system to challenge their indefinite imprisonment.

Khan was not allowed to see a lawyer until the fourth year of his detention. He carried out six hunger strikes while being held in isolation at Guantanamo. In 2012, he pleaded guilty to terrorism-related charges and agreed to postpone sentencing while he cooperated with prosecutors.

Khan admitted to delivering $50,000 of Al Qaeda money from Pakistan to an Al Qaeda affiliate in 2003, for which he was charged with murder on the grounds that the money was used in the deadly bombing of a Marriott hotel in Jakarta in August of 2003, while Khan was already in CIA custody. He also admitted to plotting with Khalid Sheikh Mohammed to wear a suicide vest in a failed attempt to assassinate the then-president of Pakistan, Pervez Musharraf.

Khan had demanded that the military tribunal allow him to question CIA agents who tortured him during his years at the agency’s black sites. Last year, the judge in Khan’s case, Army Col. Douglas K. Watkins, ruled that Khan’s descriptions of his treatment, if true, amounted to torture. He ordered a fact-finding hearing that would require CIA witnesses to appear at the Guantanamo Bay military tribunal.

The prosecutors rejected the order and threatened to defy it. In a deal with the overseer of the military commissions announced last April, Khan agreed to give up the fact-finding hearing in return for assurances that he would be released as early as next February and no later than 2025, and then released to a third country.

At Thursday’s hearing, Khan’s father, Ali Khan, and a sister, both US citizens, sat in a gallery, seeing him in person for the first time since he was imprisoned in early 2003. The father wept through his son’s statement, at times holding his head in his hands, while the sister tried to comfort him.

It is perversely ironic that Khan’s damning testimony occurred the same week as the hearing in London on the US government’s appeal of the British court’s denial of its request to extradite WikiLeaks founder Julian Assange. Assange is being brutally persecuted in retaliation for his courageous exposure of US war crimes, including torture, in Iraq and Afghanistan. His supposed “crimes” include WikiLeaks’ 2011 leak of files documenting the police state methods employed at Guantanamo.

Meanwhile, none of those responsible for the torture of countless thousands of people under the fraudulent rubric of the “war on terror” have been held to account.

Obama’s CIA director, John Brennan, who publicly defended the CIA torture program while serving under Bush and sought, in league with Obama, to block the Senate report on CIA torture—including breaking into the computers of Senate investigators—is a lavishly paid national security and intelligence analyst for NBC News and MSNBC.

Gina Haspel, who ran a CIA black site in Thailand beginning in 2002, was appointed CIA director by Trump and confirmed by the Senate.

John Yoo, the author of the Bush Justice Department “Torture Memos,” which effectively declared torture to be legal, is today the Emanuel S. Heller Professor of Law at the University of California, Berkeley School of Law.

Not to mention Bush, Cheney, Rice and the rest of the authors of Guantanamo, CIA black sites, “enhanced interrogation,” extraordinary rendition and the wars of aggression in Afghanistan, Iraq, Libya, Syria and Yemen that killed millions and destroyed entire societies. Or Obama, Brennan, Hillary Clinton and their associates, who continued the wars, kept Guantanamo open, and expanded drone assassinations and illegal government spying on the populations of the US and the world.