India’s Hindu supremacist Bharatiya Janata Party (BJP) government is seeking to tighten the country’s already intrusive and pervasive film censorship regime with its Cinematograph (Amendment) Bill, 2021. The proposed legislation would amend India’s existing film censorship law, the Cinematograph Act, 1952, to give the central government “revisionary powers,” thereby enabling it “to order recertification of an already certified film.” This will add an additional layer of direct government censorship to the existing censorship regime, overseen by the Central Board for Film Certification (CBFC), or Censor Board.

The CBFC is a statutory body under the Ministry of Information and Broadcasting tasked with regulating the public exhibition of films. It has the power to compel changes before films can be legally presented to the public or to prohibit their release outright. 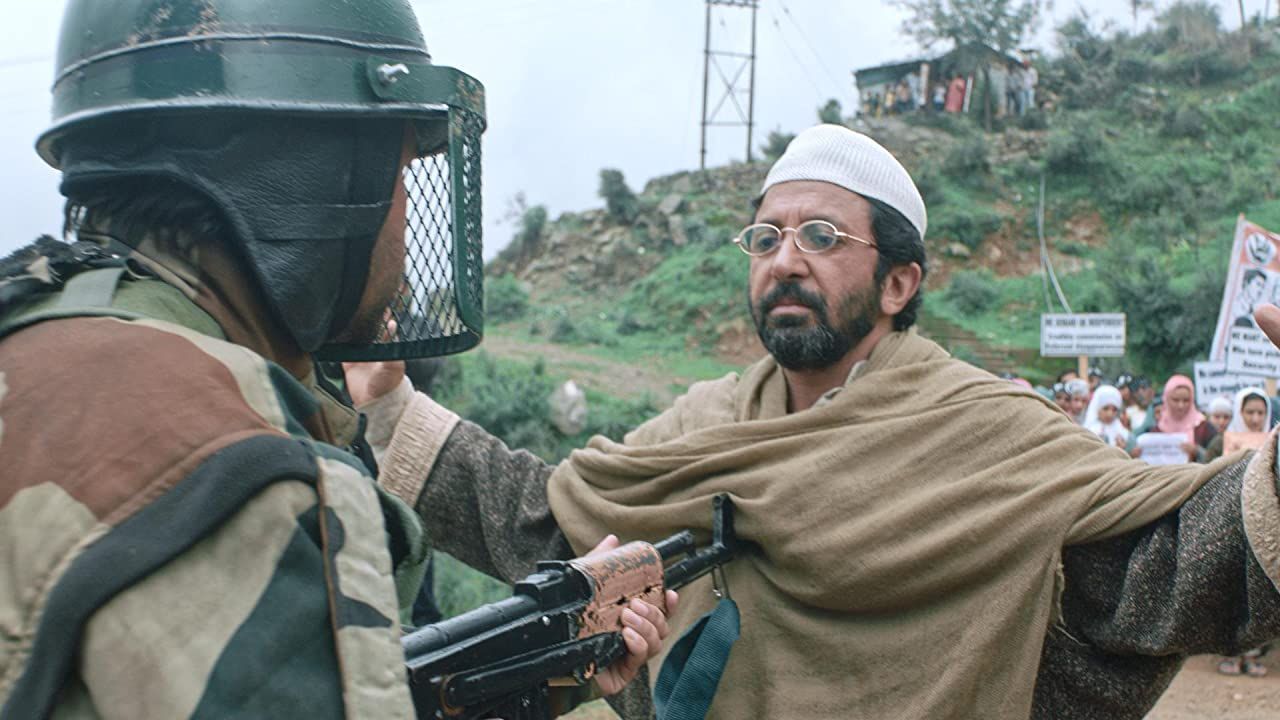 Scene from Ashvin Kumar's "No fathers in Kashmir," which was only released in India after the filmmaker appealed to the now abolished Film Certificate Appellate Tribunal.

The board consists of a chairperson and 23 members, all of whom are appointed by the central government, and has its headquarters in Mumbai, the centre of India’s film industry. It has nine regional offices in Mumbai, Kolkata, Chennai, Bangalore, Thiruvananthapuram, Hyderabad, New Delhi, Cuttack and Guwahati, which are assisted in their examination of films by Advisory Panels whose members are also appointed by the Union government for a period of two years. The CBFC regularly orders directors to remove anything it deems offensive, including depictions of sex, nudity and violence, or “politically subversive” material. It can and does routinely make certification conditional on the cutting of “objectionable” scenes.

Under the proposed Cinematograph (Amendment) Bill, the Narendra Modi-led BJP government is seeking to nullify an Indian Supreme Court ruling in a case named Union of India vs KM Shankarappa, 2001 that found the Union government cannot interfere with a film’s distribution or demand changes to it once it has been certified by the Censor Board.

The Modi government’s bid to arrogate new censorship powers follows hot on the heels of its abolition of the Film Certificate Appellate Tribunal (FCAT), which was established in 1983 as a forum for filmmakers dissatisfied with CBFC decisions to seek redress. The government arbitrarily abolished the FCAT under an executive order, the Tribunals Reforms (Rationalisation and Conditions of Service) Ordinance 2021, and a subsequent bill, the Tribunal Reforms Bill, it pushed through parliament in August.

The Modi government’s tightening of cinema censorship is part of its broader assault on democratic rights. In February, it enacted the Information Technology (Guidelines for Intermediaries and Digital Media Ethics Code) Rules, 2021 with the aim of controlling and censoring OTT platforms and social media.

More than 3,000 people involved in film production in India have signed a letter of protest to the Information and Broadcasting Ministry. “The government’s proposal to amend the Cinematograph Act is another blow to the film fraternity,” the letter declares, “and will potentially endanger freedom of expression and democratic dissent.” It goes on to warn that the proposed amendments would render filmmakers “powerless at the hands of the state” and “more vulnerable to threats, vandalism, and intimidation of mob censors.” The reference to “mob censors” concerns repeated instances of far-right Hindu supremacist and fundamentalist mobilizations, often directed and encouraged by BJP politicians, aimed at shutting down film productions or screenings.

Summing up the significance of the expanded censorship powers, the letter noted they “will effectively give the Central Government supreme power over cinema exhibition in the country.”

Veteran Indian filmmaker Adoor Gopalkrishnan told the Hindu, “Even at present, the filmmakers have not much say in the certification process, with the censor officers implementing the will of the government. ... We are not an autocracy. Every citizen has a right to criticize the policies of the government in power.” Anand Patwardhan, a prominent left-wing documentary filmmaker, said, “The Centre’s proposed amendment to the Cinematograph Act seeking to recall a film already certified by the Censor Board is dangerous and meaningless.”

In a July 1 Politburo statement, the Stalinist Communist Party of India (Marxist), or CPM, said it “strongly opposes these atrocious amendments designed to throttle cinematic talent and freedom” and urged “the restoration of the Appellate Tribunal as demanded by noted filmmakers.” In other words, the Stalinists, although nominally opposing the new changes by the Modi government, fully support the existing regime of film censorship created by the Indian capitalist state, which was itself born out of the abortion of the anti-imperialist struggle by the national bourgeoisie.

Marxists oppose state censorship of art. It is a tool of the capitalist elite to suppress freedom of expression, thought and criticism and to inculcate conformity, national chauvinism and reaction. Genuine art can only flourish if those engaging in it are given unfettered freedom to explore their ideas, free from all attempts by the bourgeois state and self-appointed moral guardians to police them.

India’s film censorship laws and regime have their roots in the British colonial state, which used them to suppress ideas and artwork that supported the anti-colonial struggle. They were taken over by the Indian bourgeoisie as part of its 1947 independence and partition deal with British imperialism. Under the political leadership of Mahatma Gandhi and Jawaharlal Nehru, the Indian ruling class took control of the entire apparatus of state repression that had been created by South Asia’s departing colonial masters and enforced the subcontinent’s bloody division into a Hindu-dominated India and an explicitly Muslim Pakistan.

The Modi government’s turn to increased censorship and repression takes place under conditions of a massive economic, political and social crisis, which has been intensified by the global COVID-19 pandemic. Officially the pandemic has killed just over 450,000 Indians, but a series of scientific studies has demonstrated that the Modi government’s criminal prioritization of corporate profits over saving lives has resulted in some 5 million deaths.

Fearing mounting opposition, above all, from the working class and rural toilers, the BJP government is seeking to further strengthen the arbitrary powers of the state. Its censorship bill is part of its efforts to suppress dissenting voices and intimidate all those who oppose the government’s neoliberal economic agenda and bellicose Hindu supremacist-laced Indian nationalism. By reinforcing censorship and promoting a reactionary social climate, the Modi regime seeks to make it impossible for artists, filmmakers, writers and other intellectuals to do any serious work that challenges its foul communalist outlook and aggressive big business agenda.

The attack on artistic freedom and fundamental rights by the BJP and its Hindu communalist and fundamentalist allies has a long history. Two decades ago, due to threats and provocations by Hindu fundamentalist organizations associated with the BJP, Indo-Canadian filmmaker Deepa Mehta was forced to abandon shooting her film Water in India. Also in 2000, the BJP-led national government ordered a painting by artist Surendran Nair to be removed from an exhibition at the National Gallery of Modern Art in New Delhi.

In 2004, the CBFC initially banned Final Solution, a documentary about the 2002 anti-Muslim pogrom in the western state of Gujarat, which killed close to 2,000 people and left hundreds of thousands homeless. The pogrom was incited by Gujarat’s then chief minister, who was none other than Narendra Modi. The film consists of interviews with both Muslims and Hindus swept up in the violence and shows how Hindu extremists exploited a fire, which broke out in a passenger train at the Godhra railway station, killing dozens of Hindu pilgrims, to unleash horrific mass violence targeting Muslims. As a result of a public campaign against the suppression of Final Solution, the ban on the film was lifted in October 2004.

In 2014, the investigative documentary No Fire Zone: In the Killing Fields of Sri Lanka by Callum Macrae was refused certification by the CBFC on the pretext that it would damage New Delhi’s relations with Colombo. In 2017, the film Lipstick Under My Burkha directed by Alankrita Shrivastava and produced by Prakash Jha, also ran into trouble with the CBFC, which initially refused to certify it on the grounds that it contained “contagious (sic) sexual scenes, abusive words, (and) audio pornography.” The film has been screened in over 35 film festivals around the world and prior to its official release, after substantial cuts, in India had earned 11 international awards.

In 2018, the film drama No Fathers in Kashmir directed by Ashvin Kumar hit a roadblock with the CBFC. It was only released in India the following year, after Kumar had appealed to the now-abolished Film Certificate Appellate Tribunal (FCAT). Kumar’s two previous documentaries, Inshallah, Football and Inshallah, Kashmir, were also initially banned by the Censor Board.

Democracy is incompatible with a political regime which arrogates to itself the right to dictate thought and culture, imposing its beliefs through its control of the public purse and the police powers of the state. The struggle in defence of artistic freedom and against communalism will not be won by appealing to the state institutions and parties of the Indian bourgeoisie—parties and institutions that defend a social order in which the vestiges of feudalism and casteism are overlain by ruthless capitalist oppression.

In opposition to the line propagated by the Indian Stalinists, the World Socialist Web Site insists that the defence of democratic rights is possible only through the development of a genuine egalitarian and anti-capitalist movement based on the Indian and international working class. It is this force that must be mobilized in opposition to the entire political establishment to defend freedom of speech and artistic expression, as part of a political struggle against capitalism and for socialist internationalism.