A coalition of over two dozen press freedom and human rights organisations has called on the Biden administration to drop all charges against Julian Assange. This is ahead of a US appeal that will be heard next week, challenging a British court decision that blocked the WikiLeaks publisher’s extradition. 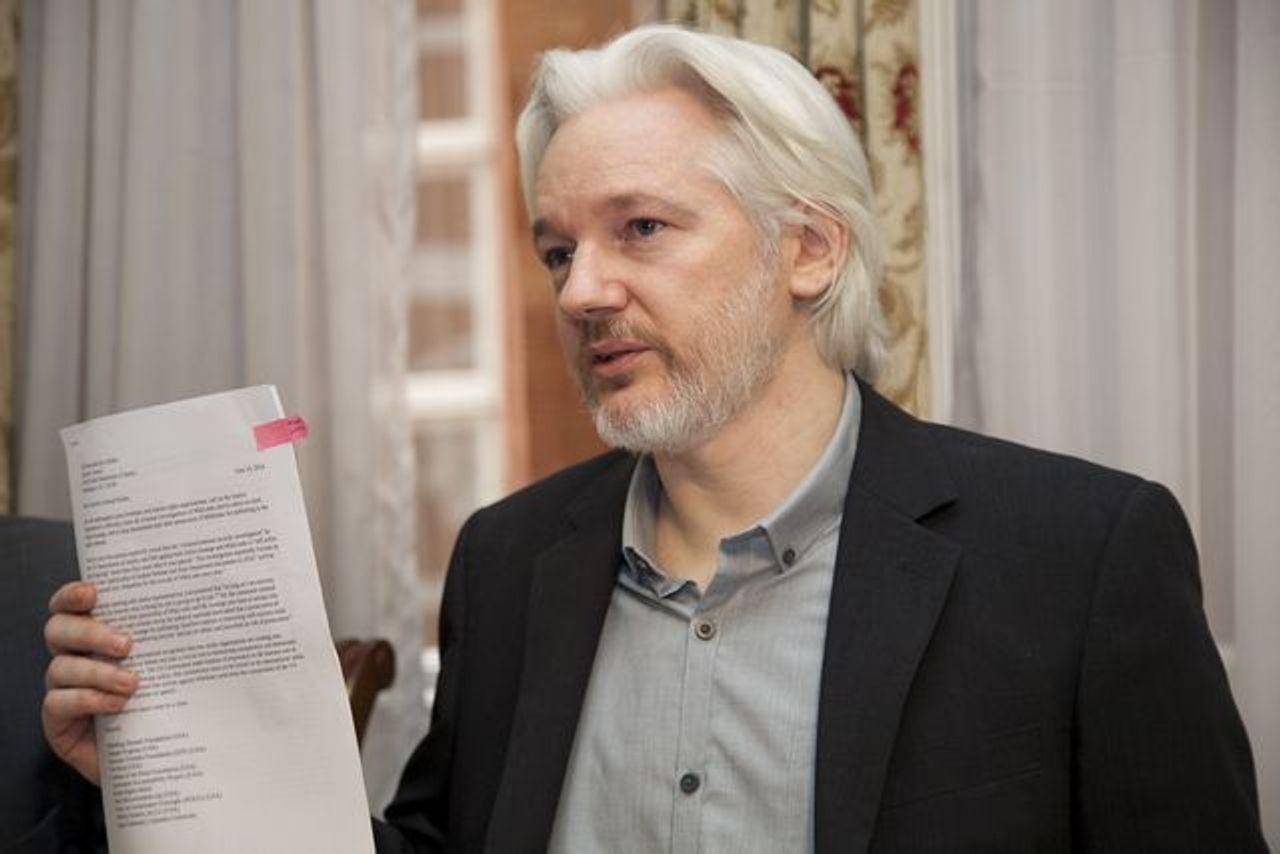 It also expresses the increasingly crisis-ridden state of the US campaign against Assange, which is widely viewed as an assault on core civil liberties. This is even more so since revelations last month of gangster-like plans by the Trump administration and CIA to kidnap or kill the Australian journalist while he was a political refugee in Ecuador’s London embassy.

Signatories to the letter include the American Civil Liberties Union, Amnesty International, the Committee to Protect Journalists, Reporters Without Borders and the Knight First Amendment Institute, along with 20 other well-known advocacy organisations.

The same coalition appealed to the Biden administration to end legal action against Assange shortly after Biden’s inauguration, but the request was rebuffed in another demonstration of the bipartisan character of the assault on Assange, WikiLeaks and democratic rights more broadly. The Democrat administration has not only continued the vendetta against Assange, but has played the lead role in crafting an appeal aimed at securing his dispatch to the US and life imprisonment.

The latest statement warns: “[T]he proceedings against Mr. Assange jeopardize journalism that is crucial to democracy. In our view, a precedent created by prosecuting Assange could be used against publishers and journalists alike, chilling their work and undermining freedom of the press.”

The signatories note: “[J]ournalists routinely engage in much of the conduct described in the indictment: speaking with sources, asking for clarification or more documentation, and receiving and publishing official secrets. News organizations frequently and necessarily publish classified information in order to inform the public of matters of profound public significance.”

The organisations involved in the initiative note that they were motivated to restate their call for an end to the prosecution of Assange “with even greater urgency, in light of a recent story in Yahoo News describing alarming discussions within the CIA and the Trump administration before the indictment against Assange was filed. The Yahoo News story only heightens our concerns about the motivations behind this prosecution, and about the dangerous precedent that is being set.”

The Yahoo News report, published late last month, reviewed in detail discussions within the Trump administration and the top levels of the CIA, about taking “extreme measures” against Assange in 2017.

Based on interviews with more than 30 former US officials, the story outlined the frenzied response of the government and the intelligence agency to WikiLeaks’ publication of “Vault 7,” a vast trove of leaked CIA documents.

The documents exposed the agency’s vast cyberwarfare capacities, including its extensive use of malware, and capabilities to place “tell-tale” markers on its own hacks, aimed at ascribing them to foreign powers such as Russia and Iran. “Vault 7” demonstrated that the CIA was engaged in mass surveillance, including through smart phones and televisions, and was discussing the development of capabilities to remotely take over the computing systems of modern cars.

The apoplectic response, spearheaded by then CIA director Mike Pompeo, rapidly involved discussions about illegal actions against Assange. These included meetings, involving Pompeo and Trump, about the prospect of kidnapping Assange from the Ecuadorian embassy, instigating a shoot-out in London if he sought to flee the building and even assassinating the WikiLeaks founder and his European-based colleagues.

The discussions were not of a hypothetical character. The statement, delivered last week to Biden’s Attorney General Merrick Garland, reflects the widespread popular opposition to the attempt to prosecute Assange in the United States for exposing US-led war crimes, surveillance operations and global diplomatic intrigues. Employees at the building have testified that discussions about poisoning or allowing for Assange to be violently removed from the embassy, filtered down to the ground level, involving UC Global staff.

In a recent interview with the Guardian, Assange’s fiancée Stella Moris outlined the impact of the UC Global operation. She noted that with pervasive spying, the placement of restrictions on Assange’s communications and visitors and dirty tricks operations, including an attempt to secretly take DNA from one of Assange’s children, the security firm and its American paymasters had effectively created “a black site in the middle of London. Complete lawlessness.”

The Yahoo News revelations exposed not only the criminal character of these extra-legal operations, but also the quasi-judicial attempt to prosecute Assange. The indictment against Assange was prepared amid the discussions about assassinating him, with Yahoo reporting that it was in part motivated by concerns from within the Justice Department that there be charges if Assange were “brought to the United States,” i.e., kidnapped by the CIA.

The Biden administration has said nothing about the extraordinary criminality of the actions taken by its predecessor, with its spokespeople instead directing media inquiries about the reports to the CIA. Pompeo has issued weak denials of the worst of the allegations, while stating that “pieces of” the Yahoo story are true and calling for the former officials who spoke to the outlet to “be prosecuted for speaking about classified activity.”

In a belated attempt at damage control, Democratic Party representative Adam Schiff stated that the US House Intelligence Committee was “seeking information” on the reports about the Trump-CIA plot against Assange. He claimed to have been completely unaware that anything was afoot, despite serving as the ranking Democrat on the intelligence panel in 2017.

The professions of ignorance have no credibility, given that the Democrats embraced Pompeo’s description of WikiLeaks as a “non-state hostile intelligence organisation,” a designation that placed the publishing organisation in a category akin to terrorists or hostile spies. In 2017, the Senate formally included the description of Assange’s media outlet in its annual Intelligence Authorization Act, with the overwhelming majority of Democrats voting in favour.

The Yahoo report follows the revelation by Icelandic weekly Stundin that Sigurdur “Siggi” Thordarson, a key witness in the US indictment against Assange, admitted that almost all of his testimony consisted of lies proffered in exchange for immunity from US prosecution for fraud and other criminal activities.

Taken together, the information demonstrates that the case against Assange should have been thrown out of the British courts as soon as it was presented. Despite this, the UK High Court granted US prosecutors the right to appeal an earlier judgement blocking Assange’s extradition.

That earlier verdict, in a District Court, upheld all of the substantive arguments of the prosecutors, including the right of states to pursue journalists for exposing material that they deem to be classified. It ignored the explicit ban on extraditions for political offenses contained in the British-US extradition treaty.

Instead, Judge Vanessa Baraitser ruled that Assange’s extradition would be “oppressive,” given the draconian conditions in US prisons and the likelihood that he would commit suicide. In light of the Yahoo reports, it appears likely that Baraitser’s ruling was motivated by fears within the British state apparatus of the widespread opposition that would ensue were Assange to be killed by the American authorities after having been extradited.

Despite the complete exposure of the US case as a frame-up and a dirty-tricks operation, the record of the British judiciary means there can be no confidence that it will reject the US appeal when it is heard on October 27 and 28.

The recent revelations have again demonstrated that the pursuit of Assange is linked to broader political issues, including a turn to authoritarianism by governments around the world, in response to mounting social and political opposition. The Trump officials who plotted Assange’s murder and kidnap and initiated his prosecution would go on to lead a fascist coup attempt on January 6. The Biden administration is proceeding with the discredited legal case, as it pursues “let it rip” pandemic policies in the interests of the corporate elite, and ratchets up preparations for a catastrophic war against China.

The record has demonstrated that the fight for Assange’s freedom and the defence of all democratic rights can only go forward through the building of an independent political movement of the international working class against war, inequality and authoritarianism.