Showing posts from September, 2017
Show All

Colombo, September 12: For the first time since Eelam War IV ended nearly eight years ago, a book entitled “Mission Impossible: Geneva” by Sanja de Silva Jayatilleka has come out on Sri Lanka’s path breaking diplomatic victory at the UN Human Rights Council (UNHRC) in Geneva on May 27, 2009, writes P.K.Balachandran in   Daily   Mirror . While Sri Lanka’s decisive military victory over the Liberation Tigers of Tamil Eelam (LTTE) on May 19, 2009 is still talked about for its historic significance for Sri Lanka, the region and the world, the diplomatic  victory registered over the Western powers at Geneva has not got sustained recognition.
Post a Comment
Read more 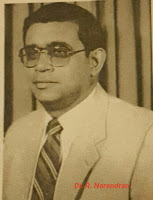