A comment of Mr. Noor Nizam on the article “ Wijedasa Rajapaksa: Unfit for the job of Justice and Buddha Sasana Minister “ by Hilmy Ahamed 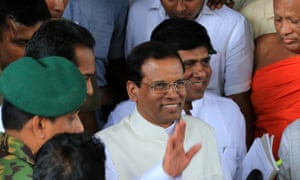 The article “ Wijedasa Rajapaksa: Unfit for the job of Justice and Buddha Sasana Minister “ published by Muslim Civil Societry activist, CEO, YATv, Vice President – Muslim Council of Sri Lanka and a prominent UNPer has become the talking point of the Sri Lanka Muslim Community elite and the English reading segment of the Colombo english educated muslim voters. This article was also circulated in the lankamuslims@yahoogroups.com and published in the Colombotelegraph.com webnewspaper - https://www.colombotelegraph.com/index.php/wijeyadasa-rajapakshe-tells-blatant-lies/ and Ground Views, another webnewspaper/blog - http://groundviews.org/2016/12/27/wijedasa-rajapaksa-unfit-for-the-job-of-justice-and-buddha-sasana minister/?utm_source=feedburner&utm_medium=email&utm_campaign=Feed%3A+groundviewssl+%28groundviews%29.
Read more »
- December 28, 2016 No comments:

The current UNP has none of these factors going for it and is a throwback to the three one-term wonders: 1952-1956, 1965-1970 and 2001-2004. Such UNP administrations usually have a profile which triggers two types of backlash—nationalist and populist—which then converge with devastating political results for the incumbent.
Read more »
- December 06, 2016 No comments:

"Sambandan demands agreement with Muslims for amalgamation of North and East Provinces " By Noor Nizam.