An independent fact-finding mission delivered a report to the United Nations Thursday cataloguing a plethora of war crimes and crimes against humanity committed in Libya, including mass killings, arbitrary detention, systemic torture and the forced displacement of hundreds of thousands. 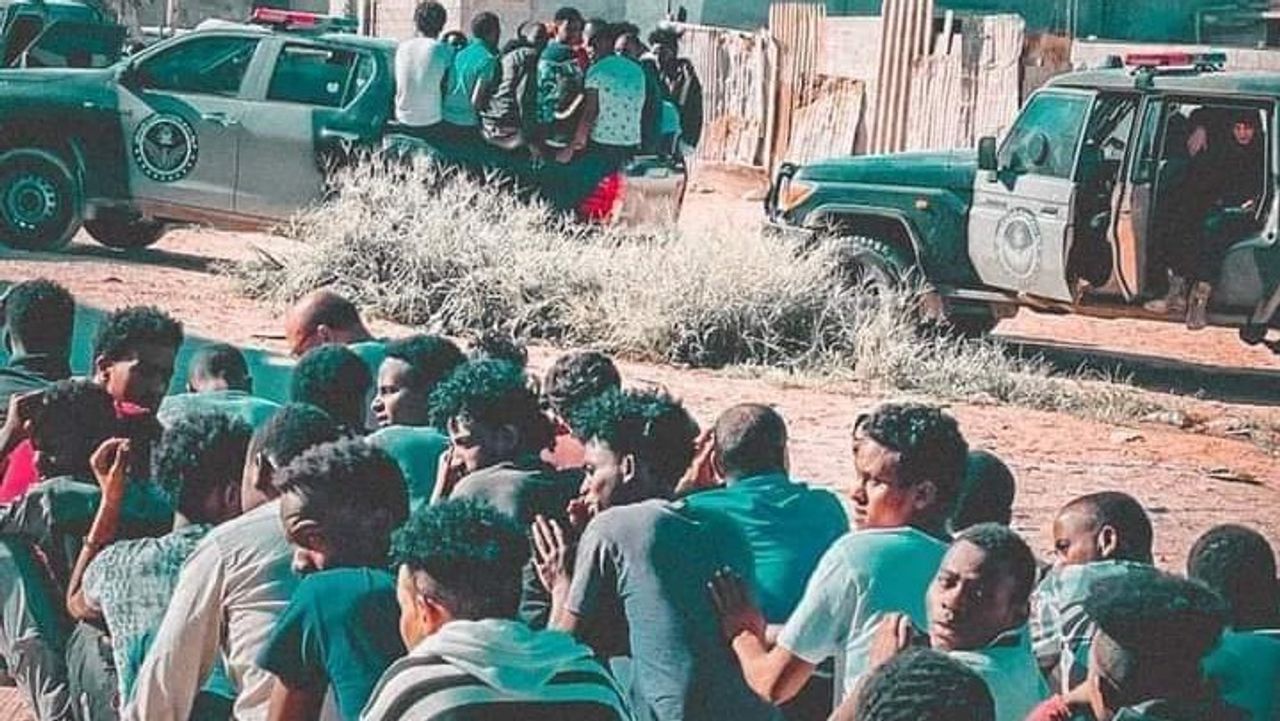 The report, which was based on research in Libya, Tunisia and Italy and interviews with over 150 people, acknowledges that the work of the mission had been obstructed by the Western-backed government in Tripoli.

While it focuses on crimes carried out between 2016 and 2020, the report begins by acknowledging: “Since the fall of the [Muammar] Gaddafi regime in 2011, the fragmentation of the State and the proliferation of weapons and of militias vying for control of territory and resources has severely undermined the rule of law in Libya. Libya has also been the theater of quasi-uninterrupted armed conflicts” resulting in crimes “against the most vulnerable, including women, children, members of ethnic minorities, migrants, asylum seekers, and internally displaced persons.”

Nowhere, however, does the report refer to what precipitated the fall of the Gaddafi regime, the disintegration of both Libya’s state and its society and the resulting mass violence, i.e., the more than seven-month war of aggression launched by the United States and NATO in March of 2011.

The report highlights the eruption of violence during the 2019-2020 battle for the Libyan capital of Tripoli between the country’s two main factions: the UN-recognized, Tripoli-based Government of National Accord (GNA)—backed by Turkey, Qatar and Italy, along with Islamist militias supplemented by thousands of mercenary fighters from Syria—and its rival government in the east of the country, which is defended by the Libyan National Army (LNA) of ex-CIA “asset” Khalifa Haftar, with the backing of Egypt, the UAE, Russia and France.

“Airstrikes have killed dozens of families. The destruction of health-related facilities has impacted access to healthcare, and anti-personnel mines left by mercenaries in residential areas have killed and maimed civilians,” said the fact-finding mission’s chair, Mohamed Auajjar.

The report calls particular attention to the mass murder carried out by the Kaniyat militia, responsible for killing hundreds of civilians in the town of Tarhuna, southeast of Tripoli. Bodies recovered from mass graves there had been shot multiple times after the victims had been handcuffed, blindfolded and their legs tied. The Kaniyat militia has aligned itself with both the GNA and the LNA at different points in the conflict.

Arbitrary imprisonment and torture remain endemic in Libya, according to the report. It states:

Most of these prisoners have never been charged, convicted or sentenced to imprisonment following a fair and public hearing. Many are detained incommunicado, some in secret prisons that officially do not exist, sometimes for years without any prospect of release. The families of prisoners are not informed of the fate of their family member. Torture is an established feature of prison system. The conditions of detention are characterized by a lack of hygiene, adequate food and medical care, as well as no separation between children and adults. The Mission documented several cases of deaths through summary executions, torture, starvation, unsanitary conditions and denial of medical care. Sexual violence is prevalent, in particular during interrogation, and it takes different forms, including rape, threats to rape or coercion into engaging in sexual abuse against other inmates. Women find themselves particularly vulnerable and the evidence also indicated that men are not spared from sexual violence.”

The report cites the forced internal displacement of hundreds of thousands of Libyans who are unable to secure viable conditions of life. It highlights the case of Tawergha, where around 40,000 people, who belong to the ethnic group of the same name, were driven from their homes in 2011 by Islamist militias based in Misrata, backed by NATO airstrikes. A decade later, the people of Tawergha have yet to be allowed to return to the town, which was razed by the US-backed militias.

Also documented in the report are the wholesale crimes carried out against migrants, most of them from sub-Saharan Africa, who enter Libya in an attempt to cross the Mediterranean to Europe. The Libyan Coast Guard (LCG), trained and funded by the European Union, it states, intercepts boats carrying migrants in a manner that is “violent or reckless, resulting at times in deaths.” It continues:

On board, there are reports that LCGs confiscate belongings from migrants. Once disembarked, migrants are either transferred to detention centers or go missing, with reports that people are sold to traffickers. Interviews with migrants formerly held in DCIM detention centers established that all migrants—men and women, boys and girls—are kept in harsh conditions, some of whom die. Some children are held with adults, placing them at high risk of abuse. Torture (such as electric shocks) and sexual violence (including rape and forced prostitution) are prevalent.

The fact-finding mission states that “acts of murder, enslavement, torture, imprisonment, rape, persecution and other inhumane acts committed against migrants form part of a systematic and widespread attack directed at this population, in furtherance of a State policy. As such, these acts may amount to crimes against humanity.”

This state policy involves a coordinated system of brutalization and exploitation of migrants, who are captured by the LCG, turned over to jails run by militias and released only after paying bribes or undergoing a period of forced labor or prostitution. The report says that some migrants have gone through this cycle as many as ten times.

It also cites the “responsibility that may be borne by third States,” without naming them, though certainly the crimes carried out by Libyan authorities against migrants are also in furtherance of the “Fortress Europe” policy aimed at keeping them out.

The report cites two incidents in May and July 2019 during the fighting around Tripoli in which a migrant detention camp set up next to a militia headquarters was bombed twice, killing scores of migrants, who were prevented from fleeing the attacks.

In conclusion, the fact-finding mission states that “The violence that has plagued Libya since 2011, and which has continued almost unabated since 2016, has enabled the commission of serious violations, abuses and crimes, including crimes against humanity and war crimes, against the most vulnerable.” The report’s authors state that they have identified “both Libyan and foreign actors” who may be responsible for these crimes, and that this information may be shared with the International Criminal Court (ICC).

But the “foreign actors” who bear the greatest responsibility for transforming Libya from what was widely considered one of the most advanced countries in Africa into a hellscape are never named. They remain in top state positions in Washington, Paris and London after launching an unprovoked war against Libya based on the phony pretext of a supposedly imminent massacre in the eastern city of Benghazi and under the filthy banner of “human rights.”

The International Military Tribunal at Nuremberg, which tried Germany’s former Nazi rulers, called the waging of an aggressive war “not only an international crime; it is the supreme international crime, differing only from other war crimes in that it contains within itself the accumulated evil of the whole.”

The truth of this principle finds bloody verification in the unending crimes carried out against the Libyan people in the decade since the US and NATO killed thousands and razed much of the country through seven months of continuous bombing, while arming and aiding Al Qaeda-linked militias to serve as their proxy ground troops.

Those responsible for this “supreme international crime” committed in Libya have never been held to account. They include former president Barack Obama, former secretary of state Hillary Clinton—who gleefully hailed the torture-murder of Muammar Gaddafi by declaring “We came, we saw, he died”—along with current President Joe Biden, his secretary of state, Antony Blinken, and other senior administration officials.

There is no prospect of the Libya fact-finding mission handing their names over to the International Criminal Court, and even if it did, the ICC would do nothing. Its standard operating procedure is to ignore the massive war crimes carried out by US imperialism—which have claimed well over a million lives over the last decade—while prosecuting minor dictators and warlords in oppressed and former colonial countries.

Of the ICC’s 30 open cases, all are against Africans, while the court has scandalously announced its dropping of any investigation of war crimes committed by Washington in Afghanistan, instead focusing its entire attention on the Taliban.

Settling accounts with the war criminals in Washington is the task of the American working class, united in struggle with the working people of Africa, the Middle East and the entire planet.

The 2021 Global Hunger Index (GHI), published on Thursday, revealed soaring levels of hunger among the poor and working populations around t...