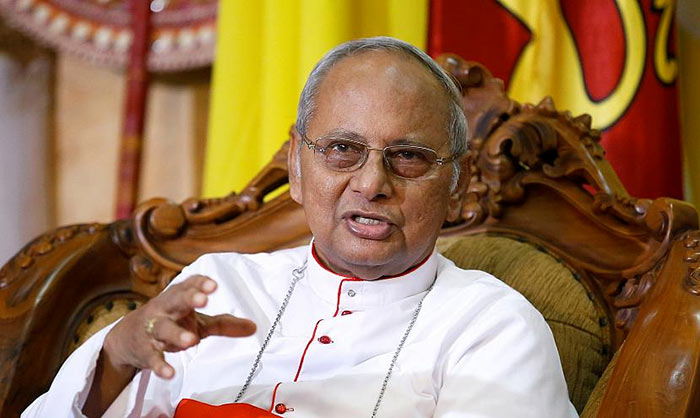 “When some officers asked Sirisena to arrest Easter Sunday bomber Zahran Hashim and his team, Sirisena disagreed, saying the Sinhala phrase ‘let’s not put random snakes inside our clothes’. We ask whether the present Government is protecting Sirisena, as they fear that links between top Government officials and the attacks would be revealed,” said the Archbishop.

The Archbishop raised these suspicions during the main commemorative event that was held yesterday at the St. Anthony’s Church in Kochchikade to mark three years since the terror attacks yesterday.

He also referred to the Parliamentary Select Committee Report, which spoke of the context in which the attacks took place, a mere seven months prior to the 2019 Presidential Election.

“We will now quote a section from the Executive Summary of the Parliamentary Select Committee (PSC) report, which indicates a possibility of a grand plot as mentioned by the former Attorney General: The PSC makes a very serious finding in terms of the status of the state intelligence apparatus, where intelligence information known to a few was not shared with relevant parties.

“The PSC also observes that further investigations will be needed to understand whether those with vested interests did not act on intelligence, so as to create chaos and instil fear and uncertainty in the country in the lead up to the Presidential Election to be held later in the year. Such a situation would then lead to the call for a change of regime to contain such acts of terrorism. Coincidently or not so coincidentally, the security situation and fear would be unleashed months away from the Presidential Election.

“Until we are satisfied that a transparent and just inquiry is conducted by all parties concerned and the truth is discovered with regard to the responsibility for these attacks, the Catholic Community in Sri Lanka will not be satisfied with the way things are happening and we reject all attempts to mislead us in this matter,” he charged.

The Archbishop also claimed that the attempt made by President Sirisena to somehow prevent the arrest of Zahran and his group, and the discouragement of the attempts by the Police to get them arrested, played a large role in ensuring that the attacks would take place.

“The story of the arrest of the Deputy Inspector General of Police, who had even obtained an arrest warrant on Zahran, cannot be understood, unless we posit a possible plot to somehow ensure that the attacks went ahead. The attempts by the security service authorities to callously ignore the information they had concerning the training camp and the collection of explosives as well as firearms found at Wanathavilluwa in Puttalam, made the attacks a reality.”

He said that Sirisena left the island without appointing an acting Defence Minister, leaving the entire situation exposed, and ignoring the expectations that these attacks might create inter-communal violence.

“Indeed 6,000 swords had been imported and distributed to Muslim homes and mosques to arm them with those means of self-defense. Thus, there was the expectation of violence. Who permitted these swords which are offensive weapons is also an unanswered question. Normally, a Defence Ministry clearance should have been obtained,” he added.

“This would have been part of the plot, which fortunately did not happen due to our insisting with the affected parties that they should not react violently towards the Muslims. We are deeply apprehensive of this act of omission by the former President Sirisena. Why did he do that is yet another unanswered question.”

He further questioned the legal proceedings about the former Inspector General of Police (IGP) Pujith Jayasundara and the former Defence Secretary Hemasiri Fernando.

“The present Government continuously refuses to carry out the recommendations of the Presidential Commission of Inquiry (CoI) report with regard to the prosecution of some of the top level political and security as well as Intelligence officers for the criminal neglect of duty in the matter. We have to sincerely ask as to why they are taking that attitude. In the case of several of these top officers, the prosecution has been so poorly handled that even the cases that have been filed against them by the previous Government have been dismissed by the courts.

“So we see a spirit of collaboration between the existing Government and the Attorney General’s (AG) Department to treat these cases in a slipshod manner. Typical was the recent release of Fernando and Jayasundara who were acquitted and discharged, whereas, on a visit to the St. Anthony’s Shrine after the attacks, Fernando publicly stated ’We knew about these attacks beforehand but did not think that these would be so extensive’.”

He also charged that the attitude of current IGP C.D. Wickramaratne is highly suspicious.

“We have repeatedly asked him to implement the recommendations of the CoI and to conduct internal inquiries against some of the officers working under him who have been recommended for prosecution by the CoI but he has instead given them promotions. This we consider as an insult added to the injury caused to our people.”

“We have a suspicion as to whether it is the superior, powerful person, who has taken all the powers in this country to his hands, that is behind these actions,” added the Archbishop.

Furthermore, the Archbishop noted that on two other occasions after the Easter Sunday bombings, certain extremist groups close to the present regime in Sri Lanka and inimical to Muslims had attempted to provoke communal violence between the Sinhalese and the Muslims, and questioned whether this was again a politically motivated provocation.

“The four warnings given by the Indian Intelligence Service to the security officers of the Police and the Intelligence services, were completely downplayed and ignored without any information being given to the public about these and thus leaving the public undefended and exposed to the attacks. Indeed, what is most surprising is that the security officers circulated among themselves, a confidential letter to warn each other, while not giving this information to the general public,” he said.

“Thus the general public became exposed to these attacks. The Parliamentary Select Committee, which came out with its study and report of these attacks, mentioned in its Executive Summary that there are indications of an attempt by those responsible for Intelligence to somehow hide the true facts of the case and to simply attribute it to Zahran and his group. Why were the security officers interested in getting the Islamic State (IS) to claim responsibility for something that they didn’t even know about? Were they trying to hide someone else who was behind all this?”

He said that Army Intelligence had gone to the home of Abdul Lathif Jameel Mohammed shortly after he left the Taj Samudra Hotel in Colombo.

“This is the bomber who wanted to set off a bomb at the Taj Samudra. He set the bomb off at the Tropical Inn lodge in Dehiwala shortly afterwards. Intelligence knew about the attacks and about the people who set the bombs. Why then was action not taken?,” the Archbishop further questioned.

“The erroneous way in which the selective carrying out of the recommendations has been done is another indication of the manipulation of the entire attempt to get to the truth and seeking to only show the responsibility of the Islamist component of these attacks and trying to hide the rest of the facts deliberately.”

The attacks targeted three Churches (the St. Sebastian’s Church in Katuwapitiya, the St. Anthony’s Church in Kochchikade, and the Zion Church in Batticaloa) and three luxury Hotels in Colombo (Cinnamon Grand, The Kingsbury, and Shangri-La) in a series of coordinated suicide bombings. Later that day, another two bomb explosions took place at a house in Dematagoda and the Tropical Inn Lodge in Dehiwala. A total of 269 people, excluding the bombers, were killed in the bombings, including about 45 foreign nationals, while at least 500 were injured.