Prominent figure in the Communist movement in Kerala, Gouri became the only woman minister in the first Left ministry in 1957. She was admitted at a private hospital in the state capital for the past few weeks following age-related ailments. She breathed her last at 7 am. Chief Minister Pinarayi Vijayan and Health minister KK Shailaja had visited her in the hospital recently.

A legendary political leader in the history of Kerala, she was the longest serving woman minister in the state. Elected to the Legislative Assembly 10 times, she was minister for 16 years as part of six different governments. She had helmed various key portfolios including Revenue, Excise, Industries, Food and Agriculture.

Gouri was born on July 14, 1919, at Pattanakad village in Alappuzha district as the seventh daughter of K A Raman and Parvathi Amma. She did her schooling at Thuravoor and Charthala while completing her graduation from Maharaja’s College Ernakulam. She also received a Law degree from Government Law College, Ernakulam.

Prior to the formation of JSS, she was a prominent figure in the Communist movement in Kerala. She was a minister in the communist-led ministries of Kerala govts in 1957, 1967, 1980, and 1987 and also became a minister in the Congress-led Cabinet from 2001 to 2006. She is one of the oldest serving politicians in Kerala politics.

Under the influence of her elder brother and trade union leader Sukumaran, she entered politics at a time when women hardly found themselves in politics. Starting her public life through trade union and peasant movements, Gouri was jailed on a number of occasions for participating in political activities. She was elected to the Travancore Council of Legislative Assembly in the year 1952 and 1954 with an overwhelming majority. She became Revenue Minister in the first communist ministry in 1957, headed by EMS Namboothiripad. 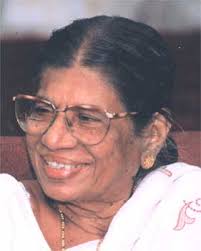 In 1957, she married T V Thomas, a prominent politician and also a minister in EMS ministry. After the split of Communist party in 1964, K  R Gouri joined the newly formed Communist Party of India (Marxist) (CPM).  But her husband, T V Thomas, stood with the Communist Part of India (CPI). This created fissures in their relationship and soon they parted owing to the differences in their political views.

In 1994, she was expelled from CPM on charges of anti-party activities.

Following this she established a new political party JSS. JSS went on to join the UDF, the arch-rivals of the LDF to which CPM belongs. She served as the Minister of Agriculture in the A K Antony and Oomman Chandy ministries.

In 2016, she severed relations with the UDF due to the debacle of her party in the 2016 assembly elections. Later, her party joined hands with the LDF but here also the party didn't get deserving representation.

The party split into many fractions, however, Gouri and her supporters always maintained a pro-Left inclination.

Though there were several attempts made to bring her back into the Communist fold, it now remains an unfulfilled dream - both for her and the Communist movement in Kerala.