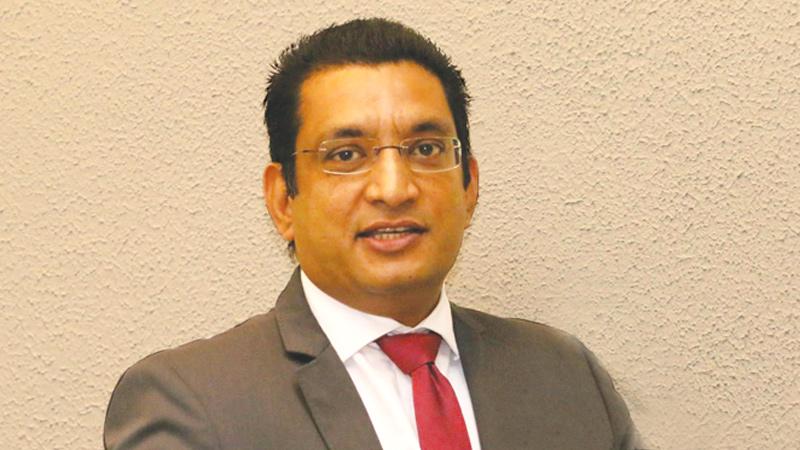 Minister of Justice Ali Sabry, PC said the Janatha Vimukthi Perumana (JVP) and some others

don’t want the country to progress. This is just like some people did their politics over the past 20 to 25 years harping on the Northern and Eastern issue by using it as a ‘beggar’s wound’. The Minister in an interview with the Sunday Observer said some of these people know when the country progresses and achieves its true potential and accelerate its economic growth that is the end of their so-called divisive, backward, outdated policies and politics.

So, naturally they need to find a way to sabotage the whole progress of the nation and to create a ghost out of nothing. Minister Sabry said there is absolutely no reason for us to unduly worry about the Colombo Port City Economic Commission Bill.

He said if the Supreme Court by any chance gives us instruction that these particular areas of the Bill would be problematic or unconstitutional, we will take that into consideration and we will go ahead with it. The Minister said however, he doesn’t personally see that there is anything which is unconstitutional in the Port City Bill.

Q: Samagi Jana Balawegaya (SJB) Parliamentarian Champika Ranawaka has said that the Colombo Port City is not a turning point and it would pave the way to divide the country. Would you like to respond to this claim?

A: It is absolutely callous and dissatisfied. This shows the bankruptcy of the Opposition itself. How can the Port City pave the way for any separation? When Champika Ranawaka was the Megapolis and Western Development Minister, he himself in one of the Cabinet papers had suggested that the 51 percent be owned by the Chinese and 49 percent for us. That is what his Ministry had suggested to the Attorney General. But we are suggesting that the entire thing is owned by the Government. So, how could it divide the country?

The land belongs to the Government of Sri Lanka and it will be operated by the Commission. The Commission is appointed by the Sri Lankan President. Then it will be audited by a qualified auditor with the sanctions of the Auditor General of the country.

Any laws which will be applicable here will be the common Sri Lankan law. Just like when we had in 1978 when we introduced the BOI special laws with regard to operation aspects of the business, that will be governed by the Commission and there are tax reliefs. That is even there now under the BOI law. Without the tax relief, no one will come and invest here. Therefore, the allegation levelled by the Opposition is absolutely false.

Q: Twenty-one petitions have been filed at the Supreme Court challenging the Port City Economic Commission Bill. Your comments?

A: There is nothing wrong in that. The people have the right in terms of the Constitution to go to the Supreme Court as the apex court of the country to look into the constitutionality of it. So, if the Supreme Court goes through that and suggests it has to be done with two thirds or this particular process has to be done with a referendum, we will take that into our consideration in strategising the future course of action.

The present Government will always act in accordance with the Constitution of Sri Lanka and will not go against the Supreme Court rulings.

Q: How do you view the recent comment by the US Ambassador to Sri Lanka and the Maldives Alaina. B. Teplitz that the Colombo Port City paves the way for money laundering?

That is where the monies are parked and reinvested. I think there is absolutely no substance in that statement and we will not allow that to happen. The Financial Intelligence Unit of the Finance Ministry is constantly monitoring these kinds of transactions. So, there is no truth in that statement.

Q: The JVP and some others say the Colombo Port City Economic Commission Bill would make the Port City a Chinese colony. Your views?

A: I think they don’t want the country to progress. This is just like some people did their politics over the past 20 to 25 years on the northern and eastern issue by using it as a ‘beggar’s wound’. Some of these people know when the country progresses and achieves its true potential and accelerate its economic growth that is the end of their so-called divisive, backward, outdated policies and politics. So, naturally they need to find a way to sabotage the whole progress of the nation and to create a ghost out of nothing.

Q: Can you assure the Port City Bill doesn’t contain anything which is detrimental to the Constitution or the existing law in the country?

A: Actually, we have done more or less similar to what we have in this country, Greater Colombo Economic Commission Law No: 04 of 1978 through which we established these Free Trade Zones. This is a progress of that and this is in line with many other special Financial Zones all over the world.

There are thousands of them. Unless, you give them some exemption and tax relief, no one is going to come and invest here. They have so many reasons to invest in different areas. So, that is the way we can actually attract investments. Sri Lanka cannot move forward without foreign investment. The competition for investment is high at present. Therefore, we decided to establish this Port City project to get down more investors and fast track investments. Our main intention is to bring in more Foreign Direct Investments to the country.

How do we address the issue of constitutionality? We drafted the Port City Bill and gave it to the Attorney General and he has given his opinion that this is constitutional. Thereafter, the people can go to the Supreme Court and it will revive it. We have taken the usual procedure which will be taken to enact a Bill. So, there is nothing less or nothing more. Therefore, there is absolutely no reason for us to unduly worry about it. If you remember, with regard to the 20th Amendment, the Supreme Court on four areas said if you want to enact them, you need to go to a referendum.

We took the advice of the Supreme Court and dropped those four areas. Similarly, if the Supreme Court by any chance gives us instruction that these particular areas of the Bill would be problematic or unconstitutional, we will take that into consideration and we will go ahead with it. But, personally speaking on the basis of the Attorney General’s advice, I don’t see there is anything which is unconstitutional in the Port City Bill.

Q: Is there any truth in the Opposition claim that the Colombo Port City has been removed from the purview of the Colombo Municipal Council?

A: Yes. That is correct. The whole idea is to create a one stop shop which means like an event manager. Earlier, when somebody had a wedding in the past, they had to go to different places and somebody had to source the bridal, coat, band, venue and flower arrangements. Today what most of them do is they go for a one stop shop or an event manager and they provide you everything. That is how it is.

If you want to get international investors to come and invest in your country, you can’t expect them to go behind the local authorities, surveyors, electricity board, environmental authority, central Government and other places for a hundred days. So, all those things will be cumbersome. What we have done is that all these laws will apply but that will be applied through the Commission not individually. So, the idea is when someone comes as a busy world-class investor, he will be given an efficient service which is on par with the others or better than the others in the region. So, they have a reason to come. It is just like an event manager or wedding planners’ job. For example, earlier we had to go to vegetable vendors to buy vegetables, fish vendors to buy fish and fair to buy coconuts. Do the people have time to do that now? They just walk into a Supermarket under one roof or one stop shop and buy everything and leave. This is also a similar kind of thing. I don’t understand as to why they are so jealous and callous about the country’s progress.

Q: Government lawmakers have raised concern on the recent controversial remarks by SLPP Parliamentarian Wijeyadasa Rajapakshe on the Port City Bill. Will the SLPP resort to any disciplinary action against him?

A: I also feel that he could have first raised that issue within the party and discussed it before he publicly made those comments to the media.

Q: Religious leaders on Wednesday had a peaceful march demanding to expedite the ongoing investigations to bring the masterminds of the 2019 Easter Sunday attacks without any further delay. Could you explain?

A: Actually, all the investigations are going on. Now the extracts have been given to the Attorney General and he is reviving them one by one to start filing the cases.

The Government cannot get involved in filing the cases. It has to be done by the Attorney General. So, he has got all the extracts and investigation notes and he is in the process of preparing it. I don’t see any delay or lapse on the part of the Government and the investigations are continuing.

Q: The health authorities have warned of the emerging third wave of Covid-19 as the public disregard the health guidelines especially during the Sinhala and Tamil New Year. Your views?

A: Of course, we know the numbers of Covid-19 cases has increased. So, this is a very crucial period. We don’t want to go for a third wave because the entire world has suffered immensely through the third wave. We have seen that in the USA, Europe and very pathetic situations in India and Brazil. It is the duty of all concerned to strictly adhere to the health guidelines and continue to exercise caution without getting into unnecessary trouble. It will take a little bit of time for us to get over this. There is a danger. But I think the way we have acted particularly during the first wave with extreme caution, we can get over that.