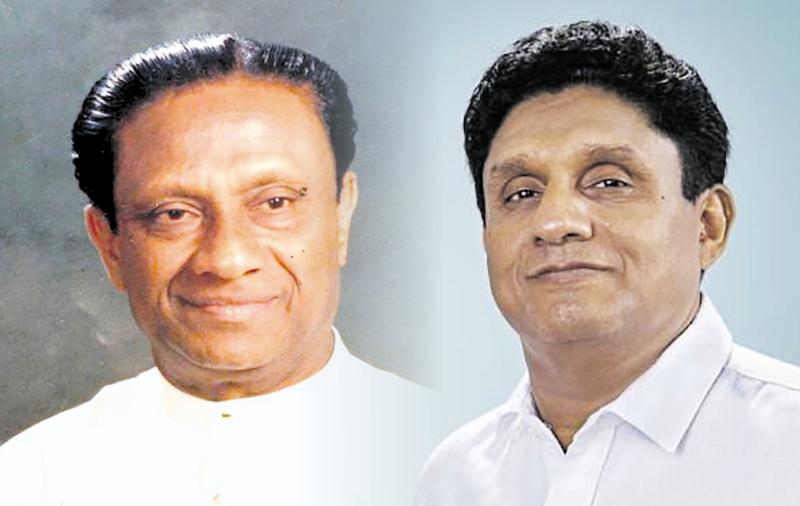 Is the Samagi Jana Balawegaya (SJB) the Premadasa party? Its frontline leadership in Parliament last week took to wearing black and casting itself as the ensemble for patriotic protest. A party ideologue of sorts later wrote to the newspapers that the SJB models itself on the Premadasa doctrine.

He wrote that Premadasa was a true patriot. A UNP (United National Party) patriot, a rarity then, come to think of it. Apparently Premadasa was a true patriot on account of sending then British High Commissioner in Sri Lanka William Gladstone a “persona non grata” notice. He also took a principled stand against India when the Indian Air Force forcibly intruded into Sri Lanka’s airspace.

On account of the current patriotic stance of the SJB, it is a “patriotic party” or so says the spinmeister of the party – or at least its newly self-anointed one. Just how did the SJB become patriotic? By wanting to see the last of the Easter Sunday attackers behind bars?

This writer wrote the following to a national daily sometime back (excerpt): “Besides, if the SJB is of the view that Rishad Bathiudeen or his brother should be prosecuted, they should be the parties making the complaints to the Police. They can’t, because he is and has been their comrade-in-arms.

“So all this noise being made about the Government veering towards the anti-national camp sounds a gigantic own goal by the SJB and its support base. They are admitting that they are harbouring an anti-national element within their primary political machinery.”

So there. Rishad Bathiudeen and his brother were arrested for suspected involvement with the Easter Sunday attacks under this Government’s national security policy of bringing all suspected terrorist sponsors into the dragnet. By contrast, Bathiudeen still remains a frontline figure of the loose SJB-led political coalition.

This must be very patriotic. In any event, patriotism is the last refuge of the scoundrel. Samuel Johnson – not Boris Johnson – said that. Is the SJB as patriotic today as when R. Premadasa gifted sophisticated weaponry to the Liberation Tigers of Tamil Eelam (LTTE)? In July 1989, then President R. Premadasa asked the then Defence Secretary General Sepala Attygalle to hand over a consignment of arms to the LTTE after a handwritten request was dispatched by the Tamil Tigers requesting for such armaments.

So writes Dr. Rajan Hoole in one of his articles recalling that era: “According to Colonel Bohran who was then the Army’s Civil Co-ordinating Officer at Weli Oya, Defence Secretary Attygalle had once called him and asked him to ‘turn a blind eye to the LTTE’s activities in Weli Oya and not to care about their attacks’. In effect, this meant, ignore attacks on Sinhalese settlers.”

That was Premadasa Senior’s patriotism, and the new-fangled SJB ideologue who wrote about the Premadasa brand of patriotism must be getting goosebumps by now. Let that sink in. The LTTE under late Premadasa’s watch was free to attack Sinhala civilians in the border villages. To take machetes to infant Sinhalese with impunity…

That kind of patriotism still lingers on in the son’s party. Sajith Premadasa was quick to condemn the arrest of the Jaffna Mayor for having the Jaffna Traffic Police Unit wear LTTE-type uniforms recently. He was after all from a tradition in which a regime in Colombo caused the deaths of hundreds of policemen at the hands of the Tamil Tigers.

These are excerpts from a UTHR report and an article by Tassie Seneviratne, retired Senior Superintendent of Police: “Then the Sinhalese officers were sent to the Army or Air Force camps while Tamil officers were accommodated at schools. Meanwhile, the LTTE abducted 899 officers. About 125 were able to escape. Prisoners were taken to the Vinayagapuram and Trincomalee jungles. Once they had arrived, the LTTE cadres lined up the officers, tied their hands behind their backs, and shot them dead. In all, 600 to 774 police officers died.

But not all the officers complied at once. ASP (Assistant Superintendent of Police) Ivan Boteju, who was the OIC (Office in Charge) of Kalmunai Police Station, refused to surrender and kept on fighting with the LTTE from 3.00 p.m. to 6.00 p.m. He protested insisting that they ‘would be tortured if not killed (if they surrendered)’. Within that period, he repeatedly requested air support and artillery support but was denied. At about 5.20 p.m. the IGP (Inspector General of Police) personally contacted Botheju, ordered to cease firing, and surrender. When they had laid down their arms, LTTE took over and all communications with the Colombo Police headquarters were lost. Then the LTTE cadres took them to the Tirukkovil jungles and executed them.”

At this point, this writer is able to end the suspense and divulge the name of the new-fangled SJB ideologue. He is senior academic Mahim Mendis. Let that sink in Mr. Mendis.

The above happened during Premadasa Senior’s watch as President in 1990. The relatively new then Premadasa Government was “negotiating” with the notorious LTTE to which it had gifted a huge quantity of armaments, ostensibly to fight the IPKF (Indian Peacekeeping Forces) which at that time was – wait for it – fighting the LTTE.

Premadasa Senior was antagonistic towards the IPKF and thought that he had the LTTE on his side! Remember Babu the LTTE chef who approached Premadasa at the May Day rally in 1992? Premadasa Sr. had implicit trust in him. He had been his chef – palace “kokiya” – and errand man at Temple Trees, or was it Sucharitha? As Premadasa waited for his trusted Babu to approach, the LTTE chef had other ideas. He blew himself up with gelignite, taking down the President and scores of others with him.

The ex-President may have had a death wish when he negotiated with the LTTE. That’s his seeking. But when he wanted the policemen in the Eastern Province to disarm because he didn’t want to upset Prabhakaran and his leadership he was “negotiating” with, that led to the execution-style killing of over 600 policemen. Very patriotic.

When some of the brave policemen resisted, they had to call for reinforcements when under attack by the terrorists. Such support was denied – strict orders from the Premadasa Government of course. Read that excerpt above from the jottings of Tassie Seneviratne, Mr. Mahim Mendis. Very patriotic.

These days Premadasa’s son Sajith is cloaking himself in the same patriotic credentials of his father. Not to mention that he is still in cahoots with the Bathiudeens, the Sampanthan types – Rauf Hakeem, and the lot.

Very patriotic people, eh, Mr. Mendis? Our senior academic may turn around and give me the usual spiel about this being a multi-cultural society, and that a pluralistic outlook calls for friends from all camps. Well, fine then, but save us the lecture about the Premadasa brand of patriotism that the son and his sycophants in the SJB are now wedded to.

Why go ballistic when the Jaffna Mayor is arrested for providing his public servants with LTTE-style uniforms? Premadasa Jr. has said there should have been an inquiry, and no arrests. He must have been nostalgic for the days his father said no fighting the LTTE. “We are negotiating,” he said. “No need to fight. Just surrender, everything will be alright.”

Everything will be alright if the Jaffna Mayor wants LTTE-style uniforms. Ah, echoes from the patriotic R. Premadasa past, noh? With friends such as the Premadasas, we Sri Lankans don’t need enemies. Besides all that, as Mahim Mendis says, the SJB is a very patriotic party of course. Oh so patriotic, except that there is this small thing about how they have been and are in cahoots with all the anti-national elements in the whole of creation that you could think of. If that’s the SJBs brand – which it is – certainly the SJB is the Premadasa party, no need for any arguments about that.

(The writer is a former Editor-in-Chief of three national English language publications and a practicing Attorney-at-Law. He is an Editors’ Guild award-winning columnist, and contributing writer and columnist for the Nikkei Asian Review and South China Morning Post, while his editorials have been published in The Australian)

The views and opinions expressed in this column are those of the author, and do not necessarily reflect those of this publication.