ACJU and persecution of Muslims by By Latheef Farook

For the first time in more than a thousand-year history, the island’s Muslim community has been persecuted since the end of the ethnic war in May 2009. It has become worse ever since eight so-called Muslim parliamentarians voted for the 20th amendment and gave wide powers to the President.

However the President of All Ceylon Jamiyyathul Ulama (ACJU), Rizvi Mufti has left the community high and dry and relaxing in the serenity of the holy city of Medina.Before leaving he has appointed a moulavi who spent three weeks in remand prison as the chief executive officer demonstrating his callous disrespect for religious values, honesty and integrity. 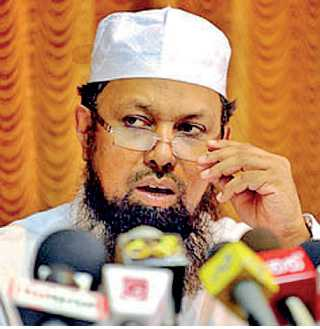 Ever since Rizvi Mufti became President of ACJU, more than 20 years ago under questionable and controversial circumstance, he has made it a one-man-show and everything was centred on him.
However his repeated blunders provided enough fodder for anti-Muslim elements to unleash a vicious campaign which has reached a stage where a Sinhala Buddhist-only government has started introducing laws striking the very root of Muslim political, economic, religious and cultural life.For example the ACJU failed during the past two decades to attend to burning issues such as reforming quazi courts, fixing the marriageable age for Muslim girls and reforming madrasas. Rizvi Mufti did nothing to deal with these. As a result today the Government is interfering to settle these issues.More than 12 years ago Saleem Marsoof committee has submitted its report on 18 July 2018 to the government. The ACJU strongly opposed any amendments to the Act stating that it is of divine origin and ‘perfect in the present state’. The ACJU has unleashed its stalwarts to abuse and lie from the pulpits of mosques deriding anyone who did not agree with them in the Committee. They do this without explaining the recommendations and their justifications proposed by the Committee itself. Instead, the ACJU used Friday pulpits to incite people against reforms saying these would be in violation of Shariah law. However implementing these recommendations is essential in the interest of the community. So far, due to ignorance, the Muslim community has failed to give the rights and privileges given by Islam to women. Time has come for Muslim women too to play their role and make their contributions to families, community and the country, within the framework of Islam. The ACJU was not given the right to represent the community and enlightened elements oppose many of its decisions.The ACJU claims that it is an organisation of religious scholars. The question is most so-called ulemas passed out from outdated madrasas remain unqualified to deal with burning current issues. For example ACJU politicised the organisation pitting the community against the other communities.The general environment in the ACJU is such that most ulemas were afraid to speak out as they fear serious repercussions. They have families to support and can’t afford to lose their jobs. Their mouths are sealed with incentives and blackmail. Thus the need of the hour is to thoroughly reorganise the ACJU to bring in non-controversial ulemas who are respected by the people. This is essential because powerful destructive anti-Muslim forces such as Israelis, Evangelical Christians and India’s RSS and VHP are here plotting, together with local racist elements, against Muslims. Ridiculous state of affairs is such that 14 civil society organisations led by Rizvi Mufti met President Maithripala Sirisena four days after violent attacks on Muslims in Digana and Akurana. Instead of showing the community’s anger the delegation thanked president Sirisena for working for communal harmony while Muslims whose houses were burnt to ashes and lost all their belongings due to Government’s failure to protect them were in tears in Akurana and other places with no cloth to change or no food to eat. President Sirisena’s ifthar party that Rizvi Mufti attended while the frightened and petrified Muslims in and around Kandy were forced to remain inside due to growing tension built up the drama of fasting to death undertaken by Authraliya Rathana Thera known for his hate campaign against Muslims.During the past two decades the ACJU under his presidency has been known for creating unwanted controversies exploited by Sinhala racist elements to distort Islam to the detriment of the Muslim community and mislead the Sinhalese masses.Starting from the halal certificate issue, and women’s controversial face cover which he claimed is compulsory though neither Quran nor Hadees speaks about it, and brought disaster and ridicule to the community. He had 20 years to attend to these issues. However he miserably failed and brought disaster on the community especially since the anti-Muslim campaign unleashed after the Easter Sunday massacre on 21 April.  The list of Rizvi Mufti’s blunders is too long and there were allegations that, with or without his knowledge, he has been used by many anti-Muslim forces.Over the years today Rizvi Mufti, like some Muslim congress politicians, lost the confidence of most in the community. Of course there are a few who still think that he is the passport to heaven while most, from all walks of life in the community, demand his resignation to reorganise the ACJU to suit the need of the time.
Source: FT.lk Sri Lanka 8 April 2021
- April 07, 2021