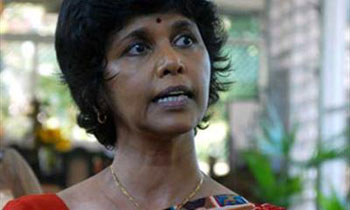 Sri Lanka's former permanent representative to the UN Tamara Kunanayakam said yesterday the attacks targeting a particular ethnic or religious group would only help justify Washington’s demand that universal jurisdiction or external intervention be applied to Sri Lanka through implementation of its 2015 Human Rights Council.

“Washington has been concerned that its resolution has been widely contested by the Sri Lankan people, including at the highest level of State. The return of the controversial US Peace Corps, a “soft power” weapon in Washington’s arsenal that had been expelled by the Government of Sirimavo Bandaranaike for spying for the CIA reflects Washington’s fears about the forthcoming General Elections and Presidential Elections,” she said and added that the US Peace Corps had been expelled from a number of countries for spying for the CIA and other covert activities, meddling in local politics, and running drugs.
She said the results of the local government election have made it all the more urgent for Washington to strengthen its allies in Government.
“The US Ambassador’s Viceroy-like behaviour even before all the results of the local government elections were released to the public, rushing as he did to request the President not to replace the Prime Minister, demonstrated the extent to which Washington would be ready to go to maintain the status quo,” she said and added that the anti-Muslim attacks provided just such an opportunity.
Ms. Kunanayakam said the timing of the attacks to coincide with the sessions of the Human Rights Council, the arrival of the US Peace Corps, and the arrival of the UN under Secretary General for Political Affairs Jeffrey Feltmann, a former US Assistant Secretary of State, was not fortuitous.
“It gave the High Commissioner the opportunity to threaten Sri Lanka with universal jurisdiction if it fails to make progress in accountability and transitional justice. His choice of language is to target only the previous Government under Mahinda Rajapaksa, to strengthen Washington’s allies within the present regime, and to advance Washington’s project to gain international legitimacy for its unilateral interventions in the internal affairs of other States,” she said.
She said the attacks also helped advance Feltman’s agenda, which was inseparable from the agenda of Washington.

“Feltman is a neoconservative hawk who has been involved in fomenting violence and the break-up of sovereign States into ethnic enclaves. Within the UN, he is also responsible for a team working on constitutional arrangements promoting federalism as a response to ethnic minority grievances,” she said and added that describing the anti-Muslim clashes as a conflict between Buddhists and Muslims or between Sinhalese and Muslims only served such an agenda, a agenda that aims at dividing people on ethnic/religious lines, fomenting conflict between them, keeping them permanently divided and weak, ultimately permitting partition of their country and imposition of the infamous Kosovo-model.