The former strongman was taking his lunch at the council canteen last week. There were only a few council members in the canteen at this time. In fact, the former strongman was alone at the table.
On seeing the former boss taking his lunch, a purohita in yahapalanaya headed in that direction. A typical turncoat, who had switched from one party to another from time to time, this worthy, hailing from a legal family, has now hitched his political wagon to the Maitri star.
In fact, he served as a deputy in the previous regime too. And on the eve of the last big poll, he broke ties with the former strongman to become one of his vociferous critics. 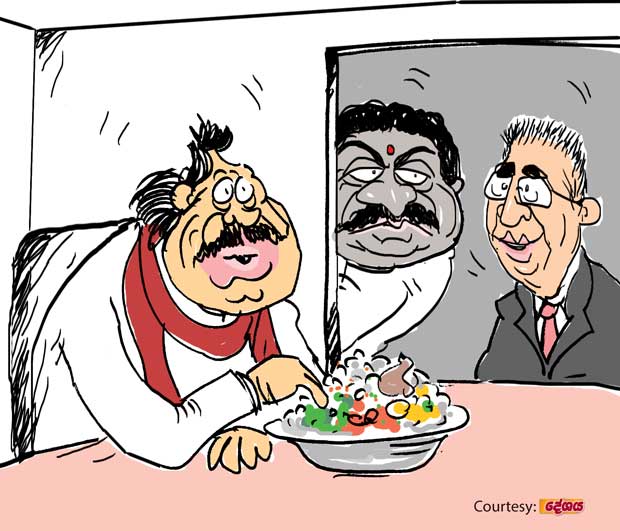 True to the adage that there are no permanent friends or foes in politics, the purohita cordially greeted his onetime boss and chatted to him for several minutes. However, finding that the former boss was not the keen listener he expected him to be, the purohita soon took leave of him.
A certain politico who was watching the scene all the time walked up to the former strongman, the moment the purohita walked away. This second visitor was none other than the King Rooster from the plantations-covered uplands.
“I saw that legal one making it up with you, Sir.  You may remember that he did to you what he had already done to me!” King Rooster told him.
“Why do you say so?”
“Why, Sir, you may remember that he started his political career from my party!”
“Yes! Yes!”
“He next threw in his lot with you… Now that the boat he is aboard is rocking – I hear he has now fallen from the grace of high-ups too - he must have thought it was high time he mended his fences, Sir!” King Rooster made his point.
The former strongman broke into loud laughter.