Who represent the Muslim community in the government? The shocking answer is “NONE”.   One may ask “how could the Muslims complain as there are several Muslim ministers and deputy ministers in the government”. Yes there are many Muslim ministers, but they do not represent the community as most of them entered into deals and got into the government. For example, the presence of Sri Lanka Muslim Congress, SLMC, in the government is deceptive as they contested under UNP tickets and entered Parliament.It all started when the founder leader of SLMC, the late M. S.M. Ashraf exploited his position to make demands from the Sinhala political parties in return for support in forming governments.The Sinhala political leaderships, often blackmailed and let down by the SLMC leadership, exploited the leadership crisis after Ashraf’s death by picking up one group to promote against the other.

Inevitably, the never-ending split bringing disrepute and disaster to the community besides creating communal disharmony .The SLMC’s miserable failure to take part in national issues isolated the community
Muslims’ frustration with the SLMC was demonstrated during the Badulla Provincial Council elections when, of more than 50,000 Muslim votes, only around 5000 voted for joint SLMC.  On the eve of January 8, 2015 presidential elections, the SLMC and its splinter group led by Minister Rishad Bathiudeen joined the President Maithripala Sirisena camp as they found that the entire Muslim community supported the latter’s camp.  During the past few months, the infighting within the SLMC has come to open. Judging from the

endless infighting, disgusting allegations of corruption, fraud, despising sex scandals, greed for positions, power and perks and overall performance, the SLMC can no more claims to be Muslim as there is no Islam in their words and deeds.
As a result the SLMC, which came with the slogan of Islam and Unity around three decades ago, has now ended up as a Greek Tragedy for the community. More than half a dozen splinter groups speak for unity.
Today, the Muslims are politically divided into regional groups placing the community in an extremely vulnerable position as politicians are easily manipulated. This confusion is exploited by manipulators, opportunists, social climbers and others to implement their own agendas under the guise of raising Muslim issues.They also started using the  All Ceylon Jamiathul Ulema (ACJU), to implement their designs.

The ACJU willingly or unwillingly allows itself to be manipulated and used as a front for Muslim as well as non-Muslim politicians who seek to achieve their own ends through the ACJU.  For example, a delegation of Muslims arranged at short notice, within 24 hours, and led by ACJU President Moulavi Rizvi, met President Sirisena early this month to discuss community issues.
During the meeting, the delegation has advocated many measures which have not been extensively discussed and decided upon by the Muslim community. For example the suggestion to do away with Muslim Schools is not a considered conclusion of the Muslim community but only the view of a few individuals.
The ACJU President spoke about a report on education prepared by former education minister Susil Premajayantha though, many believe, he was not aware of its recommendation.The question is whether dealing with the issue of education is the job of ACJU? Others raised issues such as Muslim teachers’ vacancies, hate campaign and legal provision, education in the Southern Province and the government inaction over the 500 houses built for Muslim tsunami victims.

"The community is badly in need of fatwas on extremely sensitive topics  such as black abaya and face cover which have become source of irritants  to some elements in the majority community with whom we have to live in  harmony. "

The credibility of the representations to the President are affected when the individual who made the submissions about the need to enforce the law against ‘hate speech’ was and is a strong supporter of Gothabaya Rajapaksa to whom he never made such representations.  In the midst of some individuals organised a special felicitation for a State Minister, almost a year after the government was formed in August 2015. Many believe this as yet another ruse for political mileage by self-seekers.Here too they have put forward ACJU president as a speaker.
The ACJU leadership’s involvement in politics and hobknobbing with politicians known for corruption and crime, shady businessmen and wheeler dealers has been an issue of serious concern for sometimes among Muslims who are deeply concerned about the plight of the community.
They point out that the ACJU is a religious body and should confine itself to guide the community on religious matters. However, the ACJU has overstepped its limits and entered into politics and other activities though many insist that ACJU should keep away from corrupt, commercialised, communalist and criminalised politics.
Citing its political involvement, they pointed out the ACJU’s disastrous visit to Geneva to defend the Sri Lankan government on war crimes during the war against LTTE was uncalled for. This created a lot of bitterness and hatred towards Muslims among the Tamil community. The talk is that this visit was undertaken on the request of defeated President Mahinda Rajapaksa for reasons better known to the ACJU leader.
On the other hand, what do the ACJU team know about what had happened during the war, the UNHCR and war crimes. Is this the responsibility of ACJU?  They also cited the Halal issue as another blunder. It was a simple issue, but the ACJU failed to explain and paved the way for racist elements to harm the community.The list of allegations continues. Some of the views expressed by those concerned about the community were; 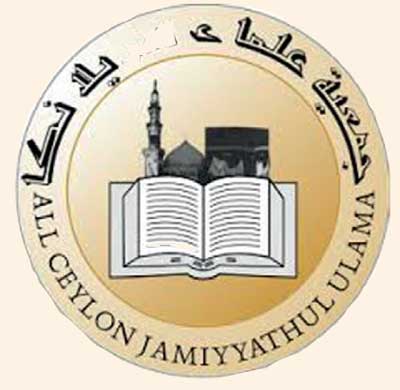 There is no priesthood in Islam. However, the ulemas passed out from often outdated madrasas got together around mid-1920s and formed the ACJU. They did serve a purpose at a time when the literacy rate was low in the community and Islam was not much known. This situation continued and over the years the ACJU has emerged as the religious body of the community which also accepted and respected them.
However things changed and the present generation is increasingly becoming aware of Islam. Thus the need for ACJU to gear itself to suit the need of the time. The ACJU need to improve the living standards and restore the respect and dignity of ulemas. Their monthly earning is around Rs. 20,000 and overall living condition is appalling.
Their miserable plight was explained in detail in an article by Ash Shaikh T.M. Mubaaris Rashadi in the latest edition of the Muslim fortnightly MELPAARVAI. They need to be trained on political matters here and abroad to help guide the community. This is essential to face challenges posed by hostile local and global forces who have found their way into the island. However the consensus is that these areas remain ignored by the ACJU.
The community is badly in need of fatwas on extremely sensitive topics such as black abaya and face cover which have become sources of irritants to some elements in the majority community with whom we have to live in harmony. National Shoora Council (NSC), referred many issues to ACJU for its fatwa. Up to date there is no response.  The devastating social impact of ever increasing number of divorces and allegations of corruption in the quasi courts need serious attention.
Muslims in the island are facing numerous challenges striking their very survival as a community. Israelis who have turned Muslim Middle East into a virtually killing field are here as part of their global agenda against Islam and Muslims.
Under such circumstances, the community cannot afford a political and religious leadership crisis as every effort needs to be made to safeguard the community and ensure Muslims live in harmony with other communities. It is a welcome sign that the civil society started to assert itself.
- See more at: http://www.dailymirror.lk/114191/Political-and-religious-leadership-crisis-of-a-Sri-Lankan-minority#sthash.hc90FZXr.dpuf
- August 20, 2016