To mark the 80th Anniversary of the Lanka Sama Samaja Party — on the 18th of December 2015 — the Leader of the LSSP, Doctor of Medicine and Doctor of Philosophy Tissa Vitharana, former Professor in the Faculty of Medical Sciences, University of Sri Jayewardenepura, offers a prescriptive publication to save Sri Lanka. The publication – pamphlet rather than book — embodying the lifesaving formula is deceptively slight in appearance. It brings to mind the document of 23 pages entitled the Manifesto of the Communist Party (more generally known as the Communist Manifesto) which hit the streets in February 1848, the year which saw the outbreak of revolutions in many overcrowded European cities.

The resounding conclusion of the Communist Manifesto is memorable and worth recalling: "The Communists disdain to conceal their views and aims. They openly declare that their ends can be attained only by the forcible overthrow of all existing social conditions. Let the ruling classes tremble at a Communist revolution. The proletarians have nothing to lose but their chains. They have a world to win."

As it happened, the authors of the Communist Manifesto — Karl Marx and Friedrich Engels – were less than 30 years old when the first copies of their inflammatory manifesto were run off a London press in 1848. Their Party, the League of the Communists, was struggling to be born at that time. Tissa Vitharana’s publication adumbrates a programme of 18 specific policies designed to save Sri Lanka in the context of a world plagued by no less than five major crises. Three of them, the food crisis, the fuel crisis and the financial crisis are acute; the other two, namely the development crisis and climate crisis are chronic. The policies proposed by the LSSP for dealing with these crises are revolutionary in their character. The means of implementing them, however, do not require forcible overthrow of existing social conditions. In other words, although the Party’s political ends are revolutionary, its means of achieving them are constitutional.


The Founding Father of the LSSP Dr. N.M. Perera settled once and for all the theoretical question of Sri Lanka’s road to socialism. His vision of the Good Society was one that was rationally planned in accordance with modern knowledge, in which people of all communities live peacefully, sharing worldly goods in community with fairness and dignity. For him the road to the Good Society was through parliament. He never doubted the feasibility, efficacy and even inevitability of the parliamentary road in the context of Sri Lanka. He adopted such a stance at a time when conventional Marxist wisdom was that there is not, and there cannot be such a thing as a peaceful parliamentary road to socialism. He persuaded orthodox radical politicians in the country that the mass of the people in Sri Lanka would and therefore should be encouraged to use universal suffrage as the decisive instrument (if not the only one) to acquire legitimately the power necessary to change the world in the envisioned direction. In fact his political Guru at the London School of Economics, the world famous political scientist Harold J. Laski contended that the British Labour Government of 1945, which was put in power by popular vote and did what the people wanted, was nearer the Marxist ideal than the regimes established by bloody revolutions in France in 1789 and in Russia in 1917.


The transitional programme of the LSSP proposals at the current stage of our social evolution highlights the following as prerequisites for saving the country from impending doom.


* Sri Lanka should pursue a strictly non-aligned foreign policy of friendship with all nations.


* Sri Lanka should establish unity in its rich cultural diversity with a true national Sri Lankan identity and the country should exist as a unitary state.


* Sri Lanka should be at all times as democratic as possible.


* Sri Lanka should retain ownership of the land it presently holds while giving long term leases or smallholder tilling rights in perpetuo for generations. State intervention should ensure a fair price for producers and consumers with regard to essential goods.


* Sri Lanka’s economy while being regulated to safeguard national interests should encourage national planning and promote private/public partnerships and cooperatives.


* Sri Lanka should harness Science, Technology and Innovation to promote agricultural manufacturing and service industries in order that the country may achieve full development.


* Sri Lanka should invest heavily in education increasing the investment to at least 6% of GDP.


* Sri Lanka’s social safety network must be deployed to protect specially the poorer sections of our population.


* Sri Lanka should ensure the independence of the judiciary and expedite the dispensation of justice.


* Sri Lanka should maintain its enviable record of promoting all aspects of the welfare of the working class.


* Sri Lanka should restore its past glory as a prosperous agricultural society by practicing safe, sustainable, traditional methods of agriculture.


* Sri Lanka should ensure the security of every citizen by implementing the rule of law without discrimination.


* Sri Lanka should protect its unique, salubrious environment by the proper management of its natural resources and disposal of waste and by preventing the pollution of its soil, air and water.


* Sri Lanka should confer on every citizen the effective connectivity made possible in the modern electronic age.


* Sri Lanka should resist the move to uncontrolled urbanization because urbanization is the deadly and relentless destroyer of the natural environment.


Party Leader Tissa Vitharana is acutely conscious of the fact that he happens to be the living embodiment of the legacy bequeathed to posterity by the Founding Fathers of the original LSSP which included N.M. Perera, Colvin R de Silva, Philip Gunawardena, S.A. Wickramasighe, and Leslie Goonawardene. As the present leader with a genetic relationship to Dr. N.M. Perera he is bound to feel the oppressive burden of ensuring the continued purposeful existence of the Party to which we belong. We recall with great satisfaction the fact that 80 years ago the Founding Fathers of the LSSP set themselves political goals which at that time seemed to be beyond "the art of the possible". Concerning this matter this is what Dr. N.M Perera said on 22 May 1972 when he seconded the resolution in the National State Assembly which transformed Sri Lanka with an unbroken history of some 2,500 years of monarchical rule into a republic: "Little did we as students in London meeting in dingy digs dream, when we inaugurated a movement that blossomed later to be the Lanka Sama Samaja Party that we would in our lifetime be the proud participants of this historic day. We affirmed as our first principle on that distant day in 1930, the achievement of full national independence. It is the fulfillment of this affirmation that gives us unending pride and pleasure." As it happened, it was none other than the first and only President of the LSSP Dr. Colvin R de Silva who as a Minister in the United Front Government of the SLFP/LSSP/CP in 1972 drafted the Constitution which transformed Sri Lanka into a Republic. The second principle the visionaries affirmed in 1930 is the socialist transformation of Sri Lanka. It is the road to this hitherto incompletely realized goal that the current leader of the LSSP is concerned to define in the present global context. He has endeavored to integrate the programme of the Party with the Sustainable Development Goals of the United Nations. He articulates a mortal fear that if "the revolutionary reconstitution of society" the programme he adumbrates with much erudition is not achieved, humanity may insensibly and inexorably sink into barbarism and even suffer extinction. Significantly, this "barbarism scenario" is in consonance with the highest Marxist tradition. In the Communist Manifesto an optimistic Karl Marx envisaged that the sequential outcome of capitalist development would be " a revolutionary reconstitution of society at large". If it failed, a pessimistic Karl Marx foresaw "the common ruin of the contending classes". This "common ruin of the contending classes" is what the LSSP Leader and theoretician Tissa Vitharana, following Friedrich Engels co-author of the Communist Manifesto, once called "barbarism". The choice before us therefore is stark: Socialism or Barbarism?
By Courtesy : the Island
- December 18, 2015

Burial of those who die of COVID19 is allowed in Sri Lanka. Gazette Notification 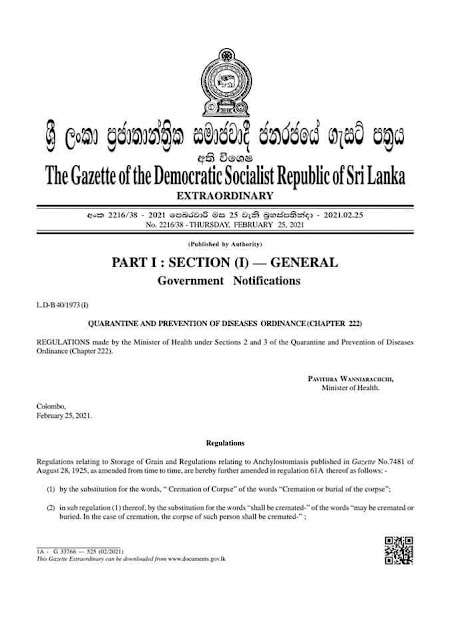