[Excerpt from the speech delivered by the writer, on 5th of June 2009 , at the Oxford Union, University of Oxford on the theme: "Post-Terrorism: Analysis of Reconstruction & Democratisation of Sri Lanka's Conflict Regions." organised by the Oxford Sri Lanka Society and the Oxford Union.]
_____________

(June 24, London, Srii Lanka Guardian) Mr President, distinguished speakers, ladies and gentleman, it is indeed a great privilege for me to be here on this occasion today to address the Muslim point of view in respect of the reconstruction and democratisation of the conflict regions. I was among those who were persecuted by the LTTE, and those who fought for freedom of speech, expression and freedom of movement. When we talk about democratic status, it is vital to talk about whether we have achieved freedom of expression and freedom of democratisation in the conflict regions. There was a time where a Muslim village headman, who criticised the LTTE, was abducted and killed by the LTTE, for just making a comment. 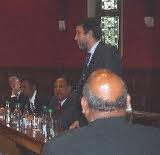 There have been many occasions, where those who stood and spoke against the LTTE, were kidnapped and killed mercilessly by the LTTE. We once filed a habeas corpus application on behalf of a Muslim provincial councillor who was kidnapped by the LTTE, and beaten to death. That was the situation under which we were living in; there was no freedom of expression or freedom of movement. We were living like slaves in the North and East under the control of the LTTE. Hundreds of thousands of Muslims from the North were expelled in 24 hours, with only 500 rupees, which is not even £2 in British currency. That was a sad event, which cannot be simply forgotten, maybe forgiven, but this was not the work of the Tamil community, but the work of the LTTE. Muslims were killed in villages, not far from where I was born. If the LTTE had a little bit more time, then they would have killed my family as well. Some of my family members were also killed in mosques whilst they were praying in Kattankudy. Their (Muslims) freedom of right to worship had been denied. Many mosques were targeted by the LTTE; people were shot and killed in the mosques; all this was done by the LTTE, the most ruthless terrorists in the world. We came though this experience, and I am fortunate that I survived to stand here with you today to represent my community. My friend (referring to Mr. S.Thavarajha who represented EPDP at the forum) said that yesterday there was a meeting with Minister Bogallama, where the Tamil community were silent when the minister was referring to the victory of the war and no Tamils applauded, but I clapped myself. There could be a misunderstanding here where the term “Tamil-speaking people” coined by Tamil politicians to say that we are all one people, who speak one language. But that is not true, that is used for the sake of political mileage, if that was true, then why were then thousands of Muslims expelled from the north from the Jaffna district, Mullaithhevu, Vavuniya and Killinochchi. Why would they do that, if they all speak the same Tamil language? I just want to tell you a brief history of what happened to us. When the question is raised as to whether we are happy with what has happened now, the answer is yes we are.

Now we feel free, we have freedom of movement and people say they are happy now, especially after the setting up of the Eastern province, where the Tamils of the Eastern province are living in harmony with the Muslims. I met the chief minister of the Eastern Province and talked about our grievances; I asked him why did you do that to the Muslims, and he replied that the commands were from the top and they couldn’t resist. They said that, they were just ordinary soldiers who had to carry out commands from Jaffna. Now we feel free, democracy is restored. As far as we were concerned, we had no choice, to freely move around and express our views.

Now I will just give you a short history of what happened in 1990 in October, in order to compare what happened to the Muslims earlier in 1915. In 1915 there was violence between the Sinhalese and the Muslims, which spread all over the central province and a few years later it all subsided, the people got together and have been living in harmony for more than a century and now they are a politically and economically vibrant community in the central province of Sri Lanka. What happened to the Muslims in the North? For just 18 years, they had been living in Puttalam as refugees, in tents and small huts. Well the situation now is that, we were able to live with the Sinhalese and the Tamil community, but the people preventing that, was the LTTE, and we are realising that now in the east, those who were one time our enemies and considered to be anti–Muslims are now our friends. There is no problem now. Whoever I speak to, they say they are happy now; they are able to freely move around. The chief minister and people who are living there now are very helpful. The people living in the North need to be relocated to where they had lived before; this is the process, which is going on now and it is part of the reconstruction that is taking place. The democratisation process in Sri Lanka is not the best, there are short falls, I am not saying that Sri Lanka is an ideal democratic country.

With regards to the Tamil community, the origin of the problem was standardisation and it was very much opposed in Jaffna but there were many other districts where it was welcomed. Many districts which were underprivileged, like Vavuniya , Trincomalee and Batticaloa benefited and there were Tamil people who had the opportunity to go to universities.

We were always putting forward proposals, when we were living under the LTTE, Muslims were quite agitated to demand for a separate provincial council. The Tamils wanted a Tamil homeland, unless we co-operated with them, they warned that we would end up like the “Bihari Muslims” who became stateless when Bangladesh separated from Pakistan. Muslim leaders also tried to negotiate with the LTTE, in 1988, when a group of Muslim leaders went to India to meet Kittu and try to bring about some consensus and sort out their grievances with them. The demand for a Muslims provincial council was taken by the Muslim political party as against the Tamils’ Traditional homeland demand; this was all counterproductive of the so-called “Tamil homeland”.

But then now, there is no such demand, what we want is a united Sri Lanka , we need the 13th amendment to address all the problems that are existing through an upgrade to the existing provincial council, which can be achieved through democratic process. We cannot go back 30 years to the problems that existed then, which are not prevalent now; there are so many changes taking place. Militants emerged because they felt that their grievances were not being addressed, if they feel that it is not addressed again now, what are they going to do? This overall perception that all the Tamils are not happy is incorrect. There are Tamil people that have spoken to me and told me that they are very happy about the death of the Tamil Leader, and the demise of the LTTE. They say that this is the end of the horror, because the people who opposed them could not live there, they had to run away and live in the Western countries. So now they feel that they are relieved from such a terror and can go back freely. My friend ( S. Thavarajha of EPDP) described what happened to his leader (Douglas Devananda) many times, and said that he was not prepared to applaud when the man who caused all the trouble is dead; this is a great irony. I am glad, and I am saying this in public, because our lives were in danger. We can’t solve the problems through terror; we have to fight via a democratic process. I am not saying Sri Lanka is perfect in dealing with minorities, we (the Muslims) now have to focus on how to get out of the mindset of being a minority; we have to think about how to be Sri Lankan. If you look at when the British left Sri Lanka, they introduced birth certificates that categorised people ethnically such as Tamil, Sinhalese and Muslims. They have not made this kind of distinction in Britain. When a child is born, they don’t indicate what nationality the child is. We have to get rid of this, I make my request to the minister (referring to Dr. Sarath Amunugama) on this forum today, to adopt another form which enables ethnicity to be chosen from a list that gives you the choice to disclose your ethnicity or choose “other”.

So I am very happy to be here today to represent my community which has been denied freedom of expression and movement in the North and the East. I am here to represent their problems, which have existed along the Tamil problem for 20 years or more. Because we were branded as a Tamil-speaking community and lumped together; only recently have we emerged and established a new political party. Now what is happening in Britain, in the European elections, is that a Tamil politician is pulling out all the Tamil votes. If a Tamil stands for elections, other Tamils will vote for them and whichever party they stand for, instead of political parties like labour or conservatives. So a division will emerge between communities and others that live abroad. This is a great danger to integrations; it is a kind of anti-democratic thing which will lead to ethnical divide. We have to work together to  address the issues, which are preventing communities from living in cohesion. This is the government, which has defeated terrorism; it is now faced with the second struggle to defeat corruption, to defeat the underworld and to defeat the white van abductions. We want to be happy to be Sri Lankan.