1990, The Year of Ethnic Cleansing Of The Muslims From the North and the East of Sri Lanka

July 1883 was Black July for the Tamils of southern Sri Lanka, where Tamils were subject to persecution by the Sinhalese mobs with the connivance of the JR government. August 1990 was Black August for the Eastern Muslims of the East, where the LTTE massacred the Muslim worshippers in Kattankudy on 3rd August 1990 and sleeping villagers in Eravur on 11 August 1990. From time to time the LTTE continued their killing spree of the Muslims until the capturing of Mutur by the Sri Lankan Army in July 2006.

In 1990 the LTTE intensified their attacks on Muslims with an objective of ethnic cleansing. In April 1992, the LTTE unleashed violence against the Muslims of Alinchipothanai and killed 69 Muslim villagers. This led to a retaliatory violence against the Tamils in Muthugala , where 49 Tamils were killed allegedly by the Muslim Home guards. On 15th October 1992 , the LTTE , attacked four border Muslim villages in the Polonnaruwa District, namely, Palliyagodalla, Akbarpuram, Ahmedpuram and Pangurana and butchered 187 Muslims including pregnant women. The Australian Muslim Times commented in their front page news of 30 October 1992, The massacres, eviction and the atrocities by the Tamil Tigers are carried out in order to derive the Muslim Community from their traditional land in the Eastern province as they have done it in the northern province and then set up a separate state only for Tamils . As a result of this systematic violence against the Muslims in the East, all Eastern Muslim regions gripped a wave of fear. The violence between the two communities created a climate where the LTTE could inculcate the minds of the Tamils that the Muslims were the obstacle to  "Tamil Eelam" . The LTTE prepared for a ethnic cleansing long before but the year 1990 appeared to have been chosen by them to embark on a full onslaught on the Muslim villages in the Batticaloa Districts , which they felt to be a impediment to their non contiguous Tamil region in the Batticaloa District. On 12th August 1990 the LTTE prowled around Eravur and Sadam Hussain village, where they massacred hundreds of people including infants. The Kattankudy and Eravur attacks were carried out under the command of three main LTTE leaders, namely Ranjith, Newton and Karikalan. Karikalan comes from Kaluwanchikudy and was always known to be an anti-Muslim. The writer personally interviewed a Muslim farmer from Rugam some years ago to verify his secondary source of information with regard to Karikalan`s brutality on the Muslims. The farmer described how he was detained and tortured by Karikalan in a LTTE camp in the hinterland of Batticaloa. 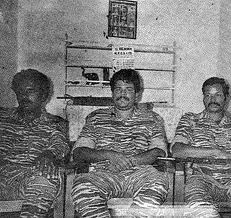 Photo: (From L to R: Ranjith, Newton and Karikalan)

Despite continuous attacks on the Muslims and their properties by various Tamil armed groups, including the LTTE since about 1985, the LTTE schemed for full control of the Muslims. Nevertheless, the LTTE intensified widespread attacks on the Muslims in the entire East in or around June 1990. The modus operandi of the LTTE was entirely different in the North, where the LTTE expelled the Muslims en masse in October 1990 whilst taking a scores of them into their custody. As Sivaram (Taraki ) wrote the LTTE had sinister plan to get rid of Muslims from their ambitious mono ethnic Tamil Eelam .

Sivaram later became a strong LTTE propagandist and conspired to get rid of Karuna cadres from Vakarai. As the writer earlier pointed out in one of his articles, Batticaloa LTTE local leader Seta admitted to Phil Rees (Author of the book Dining with terrorists ) that he had entered a mosque in Eastern Sri Lanka and gunned down thirty-one worshipers... It is also leant that Major General (retd) Ashok K Mehta questioned a Muslim member of the Citizen Committee, Batticaloa as to why he was keen to release Seta who was known to be involved in atrocities against the Muslims. Seta was arrested and detained by the IPKF in Batticaloa when his colleague bit cyanide capsule and died on the spot. The Muslim Citizen Committee member was the friend of Seta`s father and both of them were residents of Kottamunai, Batticaloa. However Seta was subsequently released and he managed to leave Sri Lanka, eventually seeking international protection under the UN Convention on refugees of 1951 and 1967 in a European country.

In 1985, all other Tamil militant groups were blamed for the killings of the Muslim farmers in Unnichai , in the Batticaloa District in retaliation to the violence erupted between the Karaitheeevu Tamils and Sammanthurai Muslims. The retaliatory violence between the two communities paved way for the disintegration and hostility for years. 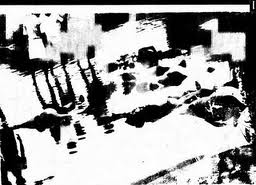 [The floating bodies of the Muslims of Eravur who were killed by the Tamil militants in Unnichai in the Batticaloa District in April 1985)
Courtesy: SLMIC (UK)]

Catalogue of LTTE atrocities on the Muslims in the East in 1990.

On 23 July 1990 5 Muslims who were staying in the Jariya Mosque in Sammanthurai were killed by the LTTE and three others injured.

On 29 of June 1990 the LTTE killed 6 Muslims including the chief Trustee of the Hijar Mosque, Oddamavadi.

On 2 July 1990 14 farmers were shot and hacked to death at Akkaraipatttu.

On the 3rd July 1990, (on the eve of Eid- Ul- Fithr) UL Dawood , the member of Citizen Committee of the Batticaloa District, and the Cluster Principal of Alighar Central school , Eravur, Al Haj M.L.A Gafoor .J.P and Quazi and his father in law U.L.Ali Mohamed were kidnapped and killed by the armed LTTE cadres.

On 7 July 1990, !7 Muslims were killed at Puthur , a border Muslim village in Polonnaruwa.

On the 14th July 1990 , 69 Muslims who were on their way back from Hai pilgrimage were kidnapped and killed by the LTTE at Onthachimadam in the Battiucaloa District.

On 19th July 1990 , Muslim passengers were abducted and killed at Ampilanthurai in the Batticaloa District.

On the 3 August 1990, 140 Worshippers at Kattankudy Meeraniya and Hussainiya mosques were murdered and sixty six were injured.

On 12 August 1990 four farmers who were working in the paddy fields in Sammanthurai were killed by the LTTE.

On 30th of January 1990, A SLMC provincial councilor of North east Provincial Council , M.Y.M.Mansoor was shot by the LTTE and later his corpse was removed from the Kamunai General Hospital by the LTTE. The LTTE also killed five Muslim patients in a private hospital and abducted 10 people, including a doctor on the same day.

The author met several pro LTTE propagandists or so called Tamil human right activists who disavowed Prabakaran`s direct hand in the massacres, atrocities and expulsion of the Muslims. When Karuna split from the LTTE, he alleged that the intelligence wing under Pottamman had committed a number of killings including the massacres of the Muslims in the east.. Nevertheless, Ramesh (former LTTE special commander for Batticaloa and Amparai) commented in his interview with the Eelanadu (12-18 March 2006) that "the Intelligence wing is under the direct control of the leader whatever the sector we are in , our national leader directs us. We deny that the intelligence wing is Pottuamman`s section as it is directly guided by the leader." . This demonstrates the culpability of Prabakaran in the atrocities committed against the Muslims, Sinhalese and the dissenting Tamils by the LTTE.